On April 5, 2010, a massive explosion ripped through the Upper Big Branch coal mine in southern West Virginia. The mine was owned and operated by Massey Energy. Twenty-nine miners were killed.

On December 6, 1907, a massive explosion ripped through the Monongah mine outside Fairmont, West Virginia.

More than 500 miners were killed. It was the worst industrial accident in U.S. history.

The disasters at Monongah and UBB are closely linked.

Both explosions were a result of immense accumulations of coal dust and a failure to control ignition sources.

The passage of more than 100 years between Monongah and Upper Big Branch has not obscured the fact that if mine operators neglect basic safety principles, miners die.

That’s according to Davitt McAteer, who investigated the Upper Big Branch mine disaster.

And he has written a history of the Monongah disaster – Monongah: The Tragic Story of the 1907 Monongah Mine Disaster, The Worst Industrial Accident in US History (West Virginia University Press, 2014.)

A week after the April 2010 Upper Big Branch explosion,  then-Governor Joe Manchin, called on McAteer to conduct an independent investigation into this disaster, the largest in the United States in forty years.

McAteer was not new to such investigations. He had conducted two earlier inquiries at Manchin’s request.

The first involved the 2006 explosion at the Sago mine where twelve men were killed and one was gravely injured. 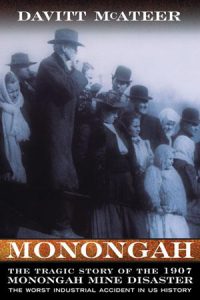 The second examined the causes of a 2006 fire at the Aracoma Alma mine, also owned and operated by Massey Energy, which resulted in the deaths of two miners.

“As we said in our independent report of the Upper Big Branch disaster released in May 2011, the explosion was no accident,” McAteer says. “Those twenty-nine men were killed because officials of a rogue coal company disregarded worker safety in the drive to produce coal. But that’s not the entire story. The UBB miners also died because regulators – the federal Mine Safety and Health Administration and the West Virginia Office of Miners’ Health, Safety, and Training –  abdicated their responsibility of making sure the operator complied with minimum fundamental safety requirements.”

McAteer says that while health and safety has improved in the decades since Monongah, our nation’s miners are not nearly as safe or as healthy as they should be.

“Lethal coal mine explosions should be events of a distant past, and black lung – instead of reemerging – should have been eliminated entirely,” he says.

More than 500 miners died at Monongah.

“Just like other disasters in that period of time, we didn’t have an exact count,” McAteer told This Week in Morgan County with Russell Mokhiber. “The company made a deliberate effort to move quickly. They were back in operation in two weeks. The ironic thing is that the same problems that occurred at Upper Big Branch occurred at Monongah. Lack of ventilation. Lack of rock dusting and water sprays. Those three elements were in play in 1907 when this occurs.”

What triggered the explosion?

“There are two theories of what triggered the explosion. I ascribe to one. But the other has merit also. The first is – they were pulling coal cars out of the mine to take to the tipple to be loaded. Fourteen of those cars broke away and went back down into the mine.”

“The second and more plausible explanation is that the mine was using shots to break the coal down. To simplify, you have a wall of coal, you drill three or four holes in it, you put black powder in there, you put a clay dummy to stop it from coming out. You ignite that and take the coal out. The scene of where it happens is near where one of these shots is being fired.”

“That theory in effect blames the miner for not tamping the hole correctly. The miners had to pay for the equipment and the clay dummies they had to put in. It’s likely that that occured.”

What made you want to write a book about the Monongah disaster?

“Monongah was a turning point in the area of Occupational Safety and Health in this country. The companies and the industries at that time denied that coal dust was explosive, denied that there was a need for government regulation, and fought unionization. They could make any decision they wanted and they got away with it.”

“This disaster was of such magnitude and it occurred on December 6, on the run up to Christmas, so it got a tremendous amount of publicity. Over $156,000 was raised from the public for the widows and families. The company had no liability. There was no workmen’s compensation. There was no social security of any kind. The families were on their own. The public responded dramatically and sent money for these families.”

“The second part that was interesting to me was the miners were virtually all immigrants. The largest group were Italians. The second group were Polish. There was a smattering of Irish, Greeks, African-Americans, Tunisians. It was a melting pot of people – like the people I grew up with. The families that I would be with were from the families in this disaster.”

“The bank that controlled the public funds for the families was controlled by the same coal company that owned the mine where the explosion occurred. The widows made lots of the decisions on their own and fought back. There was a rule that if you got the money, you had to prove that you could be responsible. They would dole it out in portions if you stayed in this country. But if you wanted the whole amount, you had to go back to your original country.”

McAteer says that father’s day grew out of the Monongah disaster.

“The first church to celebrate father’s day is a church in Fairmont,” McAteer said. “That congregation, two years after the disaster, made a commitment to these families without fathers. They said — we are going to make a father’s day commitment in remembrance of them. And there is historical evidence to that effect in that church.”

There were both civil and criminal actions that followed the Monongah disaster.

“The coal company was connected to Consolidated Coal Company and to the Rockefeller family. One of the owners was a brilliant lawyer, AB Fleming. Fleming said — we can control the lawsuits in West Virginia. He’s implying that – we have enough political power that we can squelch the lawsuits in West Virginia. It’s the ones in New York that we can’t control, he said. He was concerned that a lawsuit brought by a family in New York was out of their control. They hired a couple of New York law firms, and they were able to settle that New York lawsuit for an undisclosed amount.”

“For the criminal prosecution, they were able to wash it away. The coal industry had a tremendous amount of power over the state at the time. They ran the government. They ran the courts. They ran the power companies. They ran the water systems. They owned all of the homes of the miners. The individual didn’t have much of an opportunity.”

“When they had a grand jury, the grand jury found no culpability on the part of the company.”

How far have we come since this disaster in terms of coal mine health and safety? And where are we now?

“We have made tremendous progress since the time of that disaster. There is no question about that. In the earlier part of the century, we were killing 500 to 1,000 miners a year. In 1968, when I began work on this issue, we were killing 250 a year. Last year, we had less than 15 deaths in the mines in this country.”

“It’s through the laws, both federal and state, and removing people from harm’s way through mechanization. We are making progress. But the sad thing is, as Upper Big Branch proves, we are not, nor will we ever be, in a position to say — we won’t have any more of these disasters.”

“We disregard, at our own risk and at the risk of miners, those fundamental principles – ventilation, rock dusting, water sprays. And we are seeing a re-emergence of an epidemic of black lung in this country. And that is simply due to not paying attention.”