In the West Virginia primary of 2016, all 55 counties voted for Bernie Sanders for President. But at the Democratic convention in Philadelphia, the West Virginia delegation pledged its support to Hillary Clinton.

How did that happen?

Instead, the vote at the convention went 19 votes for Hillary and 18 votes for Bernie. 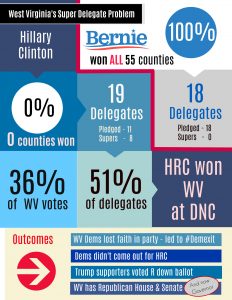 “I’ve been told that Senator Manchin whipped those eight super delegates to give Hillary the win in West Virginia,” Vickers told This Week in Morgan County.

There was one super delegate dissenter.

But he was replaced before the vote was taken.

“Back in the Spring of 2016, our vice chair of the party was Chris Regan,” Vickers said. “He came out for Bernie Sanders. He has written about how Senator Manchin and Larry Puccio contacted him and demanded that he abandon that fight and vote for Hillary. He refused to do so. In June at the West Virginia state party convention, Chris was ousted and they put in somebody — William Laird — who just happened to vote for Hillary Clinton.”

Vickers said she heard Senator Manchin say at a meeting well before the 2016 primary that — “I told Hillary that we couldn’t deliver West Virginia to her in the general election, but we could deliver it to her in the primary.”

Vickers decided not to Dem exit, but to Dem enter. And she has been going to Democratic National Committee reform meetings to make sure that what happened will never happen again.

In August, the DNC will vote on a reform proposal that would for the most part prohibit superdelegates from voting on the first ballot.

Under the reform proposal, for example, West Virginia would have been pledged to Bernie at the 2016 convention.

Vickers has been travelling around the country, video streaming the DNC reform committee meetings. Hillary supporters became suspicious and accused Vickers of being a Putin puppet.

“There is this one DNC member from California, Bob Mulholland, very old guard,” Vickers says. “I had a couple of conversations with him at different events. At one point, he asked me who I voted for. And I voted for Jill Stein for President. There was no chance that Hillary could win in West Virginia. And I wanted to help the Green Party with ballot access.”

“Mulholland was saying that this whole effort to get rid of superdelegates was a plot from Vladimir Putin to destroy the Democratic Party,” Vickers said. “I don’t think he believes that in the least. But he copied a bunch of journalists on it. And one of those journalists is Dave Weigel with the Washington Post. He covers these meetings. And I’ve talked to David Weigel many times. I’ve given him this flyer many times. He knew Mulholland was talking about me. He contacted me. And I had just gotten back from their meeting in Providence, Rhode Island. Mulholland said there was no way I could be covering the expenses myself and that somebody was covering my expenses. And it was probably Putin.”

“I had stayed at an Airbnb (in Providence). It was like $30 a night. I found a round trip plane ticket for $150. I sent my receipts to David Weigel. He contacted Bob Mulholland and said — this whole trip cost $300. And Mulholland doubled down. I don’t know if Bob Mulholland thinks people in West Virginia don’t have $300 to spend on a weekend trip — I don’t know.”

Now, Vickers has people from all over the world following her blog — selinavickers.com —  and supporting her reform work. She agrees both parties are corrupt, but instead of working outside the two party system, for now, she would rather fight than switch.