More than 30 West Virginians gathered in the Senate office of Senator Joe Manchin (D-West Virginia) this past week demanding a meeting and demanding that Manchin stop dragging his feet and take a stand on the Rockwool industrial facility planned for Jefferson County. 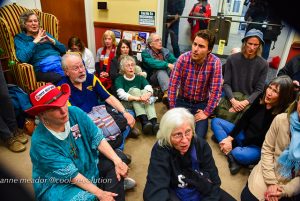 Manchin staff said he was in meetings. Citizens said they would wait. Citizens spoke. Citizens sang. For more than two hours. Still no Senator Manchin.

Citizens refused to leave until Senator Manchin showed up. After months of meeting with citizens and getting information briefings, the citizens wanted an answer — yes or no on Rockwool?

They refused to leave until they got an answer. Manchin never showed. And eleven citizens were arrested. (See video of protest here.)

Why did it come to this? 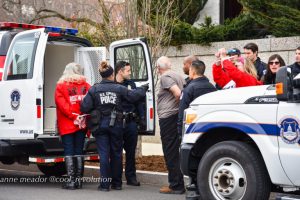 Any West Virginian who has interacted with Manchin can tell you how it works. He’s friendly. He’s kind. He’ll take a photo with you. He’ll make you seem like you are important and have important things to say. He might even sound as if he agrees with you.

Manchin has been doing it his whole political life.

If you haven’t seen it up close over and over again, it’s easy to be fooled.

But as former President George Bush put it in 2002 in a speech in Nashville, Tennessee – “Fool me once – shame on. . .shame on you……..if you fool me you can’t get fooled again.”

Citizens in Jefferson County, West Virginia are fighting Rockwool’s plans to put their heavy industrial insulation facility in the heart of their suburban rural county.

They don’t want a facility across from an elementary school spewing 156,000 tons of toxic pollution into the air.

Since last fall, they have been meeting with Senator Manchin and his staff to inform them of the perils the Rockwool facility hoping they would convince Senator Manchin to take a stand against the facility.

They met with Senator Manchin’s staff on October 17, 2018 and then put out a detailed report on that meeting. They even ran a picture of citizens and Manchin’s staff. Everyone is smiling.

After the meetings and conversations, citizens demanded Manchin take a stand for or against Rockwool before the election. Manchin refused.

But Manchin was facing an election in weeks and the people in Jefferson County were questioning whether to vote for Manchin or not.

On October 21, 2018, David Levine, one of the organizers of the resistance against Rockwool, took to Facebook to say — “Friends — whatever you think of Joe Manchin, we need him in the Senate now more than ever.”

And the consensus among the liberal Democrats protesting against Rockwool was the same — most of them would vote for Manchin. (Although not all of them. Sarah Chayes, for one, called on West Virginians to write in — No More Manchins.)

But why would most of them back off a demand for Manchin to take a stand right before the election?

Levine said that right before the election Manchin and his staff had been very helpful and were moving in the right direction.

“Senator Manchin and Pat Hayes, Chief of Staff, made it very clear how they would help us,” Levine said on October 28. “The Chief Counsel had been very helpful.”

“I was fooled,” Levine said this week. “What convinced me was a strong letter Manchin wrote to the Environmental Protection Agency.”

Fast forward to earlier this month. Manchin agrees to come to Shepherd University in Jefferson County to have a public meeting with citizens about Rockwool on February 25. The room is reserved and all is set.

When the citizens say they have invested too much time for another listening session, that they want Manchin to take a stand at the February 25 meeting, Manchin cancels the meeting.

And on Thursday, a bus full of citizens headed to Washington for this week’s showdown in Manchin’s office. During the speeches, more than once citizens complained — we voted for Senator Manchin and now he won’t even come out and talk with us?