A Dollar General truck parked at the Berkeley Springs store slid down the driveway and drifted across US Route 522 and blocked lunch time traffic for an hour yesterday. 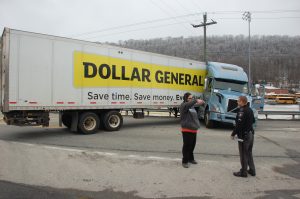 Morgan County Sheriff KC Bohrer and deputies arrived at the scene at noon to find the truck blocking both lanes of traffic and crashed into the guard rail on the eastbound side of US 522.

Traffic was blocked for nearly an hour while the investigation was conducted and the semi-truck and trailer removed.

Deputy Luke Shambaugh’s investigation revealed the driver had parked his truck on the Dollar General parking lot and by his own admission had not set the parking brake. 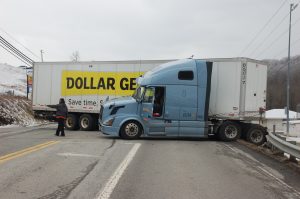 The semi-truck trailer then drifted off the lot across the highway and came to rest on the
guardrail. The driver was not in the vehicle at the time.

Deputy Shambaugh charged the driver under the unattended vehicle statute where drivers are required to set their parking brake.