An Enemy of the People Shines in Shepherdstown

George Bernard Shaw once said that the plays of Norwegian playwright Henrik Ibsen are more important to us than the plays of Shakespeare. 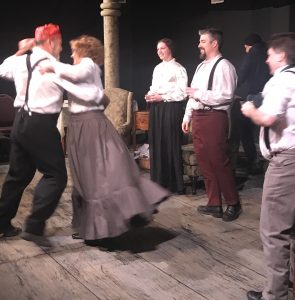 “He gives us not only ourselves, but ourselves in our own situation,” Shaw said.

Black Box Arts Center in Shepherdstown, West Virginia last night presented Ibsen’s 1882 play An Enemy of the People before a crowd of activists organizing to stop the Danish multinational company Rockwool from locating a insulation factory in Jefferson County.

It was a marriage made in – West Virginia.

Last night, An Enemy of the People gave us ourselves in our own situation.

“We’ve assembled a very strong and dynamic cast for this show,” said director Laura Richards Bakin. “The subject matter is very topical, particularly for our area. I think our audiences will find themselves being swept up in the drama.”

As they were last night.

It’s not black and white with Ibsen. 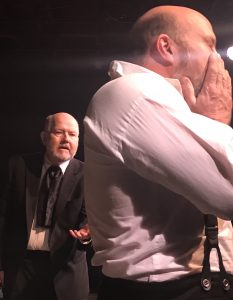 And it’s not black and white with West Virginia.

But it’s pretty dark with both of them.

The play is set in a small Norwegian spa town where people come from all over to play and heal in the local waters. (Town of Bath — go see this play.)

One problem — the baths are being polluted by a local tannery.

You have your crusading Dr. Thomas Stockmann, played by Charles Boyce, hyper righteously pushing to inform the people that the baths they are bathing in are not healing, but instead causing illness.

Dr. Stockmann’s a hot head, maybe rightfully so — on the side and truth and justice.

His brother, Peter Stockmann (played by Nelson Smith) is the mayor of the town. He’s the “moderate” brother. And he tries to calm his brother down and point out that if the information is made public, the baths will have to be closed down for at least two years and it will cost maybe 200,000 krone to fix. Result — town is dead.

For the doctor,  it’s a choice — dead town versus dead people.

And you have your small town newspaper — The People’s Messenger – which presents liberal democratic views right up until push comes to shove. (In a discussion with the cast after last night’s play, one audience member said that Shepherdstown’s local paper, The Spirit of Jefferson, reminded her of Ibsen’s People’s Messenger – at first leaning toward the citizens trying to protect the county, but quickly turning toward defending Rockwool.)