The numbers are indisputable.

With the vote, Folk became a member of the West Virginia House of Delegates from the newly created 63rd District. 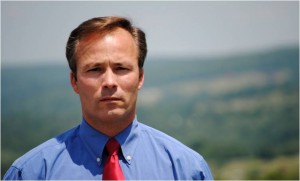 The district covers the northeastern part of Berkeley County — on the fringes of Martinsburg and Kearneysville.

Folk said District 63 was created by the Democratic legislature for a Democrat like Marshall to win.

The voter registration in the district is 37 percent Democrat to 34 percent Republican to 29 percent no party or third party.

How did he do it?

In part, by positioning himself as a local boy against outsiders.

In part, by positioning himself as an independent minded Republican — more Ron Paul and Rand Paul than Mitt Romney — even though he admits that he did vote for Romney.

In the May 8, 2012 Republican primary, Folk ran against Pam Brush.

Folk says that Brush, despite being a transplant from the Charleston area, was the Republican establishment’s candidate.

Folk says that Marshall was a “career federal bureaucrat” who claimed never to have held a private sector job in his adult life.

And he portrays Marshall as an Obama-supporting, liberal do gooder.

“To this day, Donn has not called to congratulate me on my victory,” Folk says.

Marshall and his wife Shelley both worked for the Defense Intelligence Agency in Virginia.

Shelley was killed in the 911 attacks on the Pentagon.

Marshall retired and moved back to West Virginia where he has dedicated his life to public works.

Marshall created the Shelley A. Marshall Foundation, a charity he established in honor of his wife.

Marshall says he works with a day care that offers affordable rates and excellent care —  “so working parents can go to school or work to break the cycle of poverty.”

He works with the Opequon Creek Project to help clean up the creek.

He says that Folk, by comparison, has done virtually no community service.

(Folk counters this saying that he has done community service, including serving as a 4-H camp counselor.“You can do good work without being on the board of a non-profit,” Folk said.)

But Marshall points out that outside right leaning groups like Citizens Against Lawsuit Abuse, the Eastern Panhandle Freedom Fund and the Campaign for Liberty made up the difference, spending more than $25,000 on mailers supporting Folk and attacking Marshall.

Both Folk and Marshall went door to door with their campaign teams — knocking on thousands of doors.

Both Brush and Marshall had great web sites compared to Folk’s.

But at the local level, it’s not as much about the web as it is person to person.

Folk has strong family ties to the community.

He was born and raised in the area.

He taught one year at Hedgesville High School, one year at Musselman and two years at Shepherd.

His wife teaches at Handley High School in Winchester, Virginia.

He says that government authorities — including the Federal Aviation Administration —  created problems for his dad’s company — and that’s one reason he ran for the House of Delegates.

But he waffles when it comes to specifics.

Folk worked for eight years as an airline pilot for Continental Express and then for a short time for United — before he was furloughed in 2008.

He’s back now working for the newly merged United/Continental company.

He has been a member of the Air Line Pilots Association (ALPA) union since 2000.

And as a union member, the question of right to work legislation is a touchy one.

When asked about it, Folk at first says he’s for “the right to work.”

That doesn’t mean he’s for right to work legislation.

Right to work legislation is being pushed by big business groups nationwide as a way to weaken unions.

A version recently passed in Michigan and right to work laws are in place now in 24 states. West Virginia is not one of those states.

In a nutshell, right to work would give workers the right to opt out of a union — while benefiting from increased wages and benefits secured by unions in any given industry.

When asked about the right to work legislation introduced in the West Virginia legislature, Folk says he’s against it because of certain exemptions that are included in it.

What about if the exemptions were stripped out — would he favor it then?

It depends, he says.

He’d have to look at the legislation.

In fact, Folk belongs to a union.

“Did you notice that the West Virginia right to work group didn’t support my campaign?” he asks. “Neither did the unions.”