There are 100 seats in the West Virginia House of Delegates.

Ten of those seats are from the eastern panhandle.

Seven of the ten are held by Republicans. 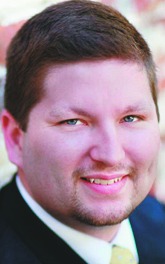 Three of the ten are held by Democrats.

Five of the seven Republican seats are held by right-wing Republicans who ran unopposed in November.

There is only one candidate in the state of West Virginia legislature who defeated an incumbent Republican in November.

District 61 covers the city of Martinsburg.

Barrett is 30 years old and owns Anthony’s Pizza in Inwood.

It was Barrett’s second run against Duke.

How did Barrett score a victory in 2012?

First, the district was one of a handful in the state that went for President Obama.

But more importantly is this:

He and his campaign workers knocked on more than 3,000 doors in the district.

“We knocked on a lot of doors,” Barrett told Morgan County USA. “And for most of these folks, no one ever stops by to listen to their concerns.”

Barrett says that his campaign targeted the 6,000 or so voters who have a strong voting record – citizens who have voted in two out of the last three elections.

Barrett estimates that he personally knocked on more than 2,000 doors.

“I would say – I want to be your representative in Charleston,” Barrett said. “Here’s my card. You can call me at this phone number or e-mail me at this e-mail address.”

“And when people went into the voting booth, they say to themselves – I know that guy,” Barrett said.

He says he didn’t make many phone calls, but did run an aggressive radio campaign and put out four mailers – some of which were hard hitting.

One of the mailers lumped in Duke – who had a reputation as a moderate Republican – with the fringe Republican delegates from Eastern Panhandle.

One was that the Eastern Panhandle was not being heard in Charleston.

The other was the homestead exemption for seniors.

Barrett says that on election day, he predicted almost every precinct correctly – except for two.

As for the five right-wing Republicans who got a free ride this year in the Eastern Panhandle – “there is a dearth of candidates in part because the job is difficult,” Barrett said.