It was one of those lobbyist affairs buried in the swamp — in this case, Dirksen Senate Office Building Room G-50 — at a party held by the West Virginia State Society and sponsored by the likes of FirstEnergy, Merrill Lynch and United Bank. 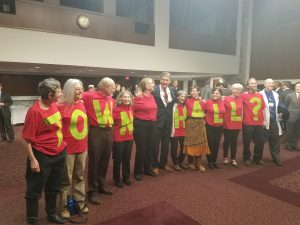 According to a press release from the West Virginia State Society, the entire West Virginia Congressional delegation – Senators Joe Manchin and Shelley Moore Capito, along with the three members of the House from West Virginia — David McKinley, Alex Mooney and Evan Jenkins — “will offer remarks and spend the evening mingling with West Virginians and friends from around the DC-area.” 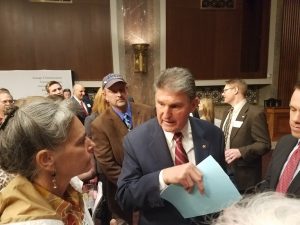 Not friends from West Virginia.

But word got out and more than forty town hall deprived friends from West Virginia made the trip into the swamp to mingle with the swamp dwellers.

“Our elected representatives have refused to hold town hall meetings in West Virginia,” said organizer Tracy Cannon. “So we are now forced to travel to Washington DC to meet with them. “We are eager to mingle with our elected members of Congress and discuss with them their votes that threaten our precious waterways, our health, and our livelihoods.” 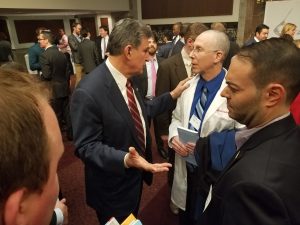 It was Wednesday March 8. The room was packed with lobbyists and Congressional staff. And the friends from West Virginia.

After Capito spoke, the West Virginians called for a moment of silence for those without health care in West Virginia.

The town hall was on.

How did our elected representatives respond?

After Capito, Mooney and Jenkins made brief remarks, they took off, despite shouted pleas and boos from those who made it from West Virginia.

“You said you would mingle,” one woman shouted.

Only Manchin dove into the crowd and took questions for more than an hour.

And Manchin proved himself to be a master at diversion.

When Manchin was confronted by constituents upset that no one in the Congressional delegation has held town hall meetings, he claimed to have held meetings throughout West Virginia.

But as one citizen pointed out, they were private gatherings, not town hall meetings.

For example, one meeting that Manchin might have been referring to was in November 2016 when Manchin attended a private Region 9 development hearing in Berkeley Springs where he touted the benefits of natural gas pipelines and urged local officials to push back against Morgan County residents resisting the Mountaineer Gas pipeline.

“People don’t want any type of inconvenience on their property,” Manchin said at the time. He suggested the state could consider investing in the Mountaineer Gas project.

“If the state becomes involved, it’s a public project and with eminent domain you can move on it when you need to,” said the senator.

The Morgan Messenger reported that Manchin raised the prospect of individual counties partnering with Mountaineer Gas to move the project ahead.

At the DC event, a number of people challenged Manchin on his support for the pipeline projects.

Manchin said he was willing to listen to concerns, but he didn’t budge on his position in favor of fossil fuels and natural gas pipelines.

When Manchin was challenged on his support for the revocation of the stream restoration rule, he launched into a defense of coal.

And Chess Yellott, a medical doctor from Shepherdstown, called on Manchin to support a Medicare for all single payer system — a system that would drive down costs and cover everyone.

Manchin indicated support for the concept — but then asked — what do you want me to do?

“Introduce a single payer bill in the Senate” one citizen answered.

Manchin shrugged his shoulders as if to say — “you known I can’t do that.”

But Manchin stood and took questions for more than an hour. That’s more than you can say for Capito, Mooney and Jenkins — who fled the scene.

Toward the end of the evening, a group of citizens took off their jackets and exposed t-shirts with letters that spelled — Town Hall?

Manchin jumped in for a photo.