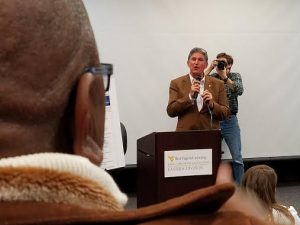 It’s the second time in a month that Manchin has told constituents that he’s looking at a Medicare for all system to replace an unraveling Obamneycare.

Manchin has been clear that he will vote against the emerging Trumpcare/Ryancare that will balloon the ranks of the uninsured from 30 million under Obamneycare to 50 million.

Under single payer, every citizen gets a birth certificate and a Medicare card at birth.

The United States pays per capita more than two and a half times more than industrialized countries with single payer systems. 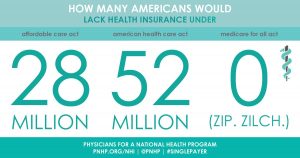 Almost a quarter of the twenty or so questioners called on Manchin to get behind single payer.

HR 676 – the single payer bill in the House – has 65 co-sponsors. No Senator has introduced a similar bill in the Senate.

And by their reactions to single payer questions, the majority in the room wanted Manchin to sponsor a single payer bill in the Senate. 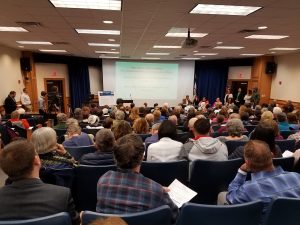 “I’m studying the whole Canadian system,” Manchin told Dr. Catherine Feaga of Shepherdstown, West Virginia after Dr. Feaga asked Manchin a question about the single payer system. “The Canadian system has better results longevity-wise, more wellness. But boy I tell you one thing. They make you toe the line. They don’t give you everything you want. They don’t give it to you when you want it.”

“Neither does our system,” one person yelled.

“It’s much different what we have today,” Manchin said. “In Canada, if you abuse it, you lose it. They are not going to let you come every day to a doctor.”

“They don’t let you come every day to a doctor here,” yelled another attendee.

“We are open to all of these things,” Manchin responded.

When a citizen challenged Manchin about his corporate contributions affecting how he votes, Manchin said – “money doesn’t affect how I vote.”

“Bernie Sanders hasn’t introduced it in the Senate either – why hasn’t Bernie introduced it?” Manchin shot back.

When Manchin questioned whether a single payer system would cost more than what we are paying now, Lynn Yellott responded that according to a Commonwealth Fund study, 95 percent of Americans would pay less money than they do now – in terms of co-pays, deductibles and insurance premiums.

“I provided your staff last week with a financial analysis of HR 676,” Yellott told Manchin after Manchin said – “I don’t know enough about single payer.”

“I hope that you will take a close look at it,” Yellott told Manchin.

The session ended with questions from two citizens who spoke in favor of a single payer system.

“The German health care system took me in — everybody had coverage, no matter what their background, how much money they made,” said one man who identified himself as a veteran. “And it was effective. Everyone was in the system.”

“I’m open to everything and anything,” Manchin said.

The last questioner told Manchin that he should take some of the money he has taken from the pharmaceutical industry and “build us a long-term opiate treatment facility in Martinsburg.”