TransCanada’s Columbia Pipeline Group is shooting for the fall of 2018 to complete a four mile natural gas pipeline that will run from the Pennsylvania border east of Hancock, Maryland, then under the C&O Canal and the Potomac River and on into West Virginia to connect to another natural gas pipeline being proposed by Mountaineer Gas Company. 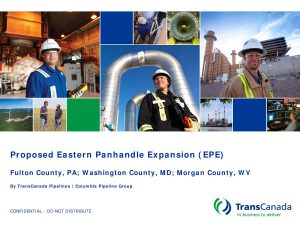 But that 2018 target date seems like an ambitious goal given the regulatory hurdles the TransCanada pipeline faces, including approvals from the National Park Service, the Federal Energy Regulatory Commission, the Army Corps of Engineers and the Maryland Department of the Environment.

Already, TransCanada is having problems clearing the first hurdle – the National Park Service.

In a document marked “confidential — do not distribute,” TransCanada says that it plans to apply to the National Park Service for construction of the pipeline in December 2016.

But that can’t happen until the company completes a survey of the area.

And while TransCanada applied for a survey permit in September 2016, and TransCanada says that it intended to start surveying work in October and end in December, that survey permit has yet to be approved by the National Park Service. Surveying cannot begin until the permit is issued.

TransCanada says in the document that one purpose of the pipeline is to deliver gas – via the Mountaineer Gas pipeline – to the new Procter & Gamble facility in Berkeley County.

But Procter & Gamble said earlier this year that it had “not signed a letter of intent with any gas company for the Tabler Station plant.”

And Procter & Gamble says that the plant is on schedule to open later next year and will be fully operational by 2019.

Read: P&G is not depending on natural gas from the proposed pipelines.

In the document, TransCanada says it plans to use a technique called horizontal directional drilling to dig under the C&O Canal and the Potomac River.

According to the company, horizontal directional drilling is a “trenchless method for installing a product that serves as a conduit for gas and is achieved by use of hydraulic drilling equipment pushing a drill bit into the earth at a predetermined angle to create a path for the new pipeline.”

TransCanada also claims that “the C&O Canal enabling legislation is flexible enough to authorize a right of way for construction of a trans-park natural gas pipeline.”

“Section 5(b) of the C&O Canal enabling legislation contains language related to park access and states that ‘other uses of park lands, and utility, highway, and railway crossings, may be authorized under permit by the Secretary, if such uses and crossings are not in conflict with the purposes of the park and are in accord with any requirements found necessary to preserve park values.’”