Dr. John Ikerd, an expert on the environmental effects of concentrated animal feeding operations (CAFOs), will be featured Tuesday December 13, 2016 at 6 pm at the Fulton County Library in McConnellsburg, Pennsylvania. A video of a speech Ikerd gave recently will be shown. 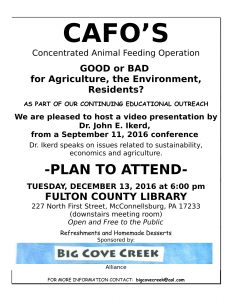 Ikerd is a Professor Emeritus of Agricultural & Applied Economics University of Missouri Columbia. Ikerd has written a number of books on economic sustainability.

For months now, residents of Fulton County have been fighting a proposed factory farm that is being planed for a mountain meadow that drains into two tributaries of Big Cove Creek.

Fulton County resident Marjorie Hudson is leading the opposition to the facility. 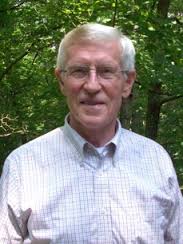 “With Factory Farms, there is no middle ground,” Ikerd writes. “We are slowly winning the war against factory farms, even though we are obviously not winning every battle. Americans are becoming increasingly aware of the multitude of environmental, social, and rural economic problems that invariably arise from the industrial approach to animal production – commonly called factory farming. In reality, factory farms have far more in common with factories than real farms.”

“There are numerous well-documented problems associated with CAFOs. They pollute the air with noxious odors containing dozens of toxic substances, including ammonia, hydrogen sulfide, methane, and dust particles carrying a variety of chemical and biological contaminants. CAFOs have polluted thousands of miles streams and countless ground sources of drinking water with excess nitrogen and phosphorus, antibiotics, antibiotic resistant bacteria and toxic biological organisms originating in animal manure. While air and water pollution typically are treated as environmental issues, the pollution from CAFOs represent significant, well-documented risks to public health.”