Damian Heath, chef at Lot 12 Public House of Berkeley Springs, has been named a semifinalist for the prestigious James Beard Award.

Heath was nominated as best chef in the Southeast. 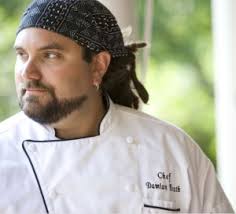 The James Beard Foundation’s mission is to “celebrate, nurture, and honor America’s diverse culinary heritage through programs that educate and inspire.”

A cookbook author and teacher, James Beard was a champion of American cuisine who helped educate and mentor generations of professional chefs and food enthusiasts.

The Beard Foundation continues in the same spirit by offering a variety of events and programs designed to “educate, inspire, entertain, and foster a deeper understanding of our culinary culture.”

Damian Heath grew up in Berkeley Springs, the son of award-winning artists Jonathan and Jan Heath.

According to the Lot 12 Public House website, Damian Heath’s love of food began at an early age, “steeped in a flavorful melange of large Italian family dinners with lots of laughter and more food than they could ever eat, much of it gathered from their garden and pantry shelves.”

His career began not at a culinary institute, but at the University of North Carolina at Wilmington, where he studied philosophy and art history.

After two years of undergraduate studies, he went to the renowned Baltimore International Culinary College.

While in culinary school, he trained in Europe under Executive Chef Peter Timmins.

When he returned from Europe, he worked at the Yellow Brick Bank Restaurant in Shepherdstown, WV as sous chef when he met his future wife, Betsy. Betsy also grew up in the eastern panhandle of West Virginia, in Berkeley County. She was attending Shepherd College, pursuing a BA in Fine Arts, when she and Damian met.

Upon leaving Shepherdstown, they moved to Charleston, South Carolina.

Betsy worked closely with the opening of an upscale restaurant in Mount Pleasant and they both were employed by caterers in the downtown Battery area.

The two were approached to open and manage an upscale bistro on the Outer Banks in North Carolina and in December 1997 they moved to Buxton, NC.

In April 1998, the bistro opened with rave revues. Damian’s menu was revolutionary for the area, business was wonderful and they had a great first season.

But Damian’s vision for his ideal restaurant remained in his hometown of Berkeley Springs, knowing that it would be a great environment for a small, upscale and eclectic restaurant.

The Heaths had been discussing their future and knew that Berkeley Springs was their destiny.

Once they saw how perfect the house was, it was settled.