He also introduced HB 2552 which allows consumers to take their complaints directly to the Attorney General if the Public Service Commission doesn’t act on them.

“As you know, Frontier Communications is the only game in town for many rural communities in West Virginia when it comes to Internet service,” Smith said in a Facebook post.

“After introducing the legislation, I spoke with someone in leadership and was told it’d go nowhere because it would hurt Frontier. In other words, Frontier has its hands in our state Capitol. The company knows how to play ball with the legislative process.”

“HB 2551 does what it says,” Smith wrote. “It bars Internet providers from falsely advertising their Internet speeds. Anyone who knows me is well aware of my longstanding frustrations with Frontier. I regularly conduct speed tests on my Internet connection and the results are laughable. I’ve had download speeds of around 0.20 megabytes per second. No wonder they’re called Frontier. Those are the kinds of speeds you’d expect on the American frontier in the 17th century.” 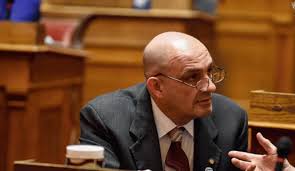 There is a member of the West Virginia House of Delegates who is also an executive for Frontier.

He is Paul Espinosa (R-Jefferson).

Espinosa was a guest on Talk Radio WRNR in Martinsburg this morning.

Espinosa was asked about his work at Frontier.

“I haven’t read the entire legislation,” Espinosa said. “My primary focus is on my committees — Finance and Education — I pretty much focus on those pieces of legislation.”

“Delegate Smith did come to me near the beginning of the session indicating that he was planning on introducing a couple of pieces of legislation that would potentially have an impact on Frontier,” Espinosa said. “We briefly discussed the legislation. At that time, he explained the purpose of each one. I briefly shared with him some of what I thought were unintended consequences of that legislation. But beyond that, I have not been involved with that legislation.

Any of my colleagues who have come to me asking me about the legislation — I have referred them to our government affairs folks who are here at the capitol to address any questions or concerns they might have. I have pretty much taken a hands off approach on that legislation and have referred them to the folks at Frontier who can address any questions they might have.”

Espinosa was asked — what unintended consequences are you talking about?

“I don’t disagree that a company should provide what they say they are providing,” Espinosa said. “If it created a definition of broadband — I thought the number that Delegate Smith told me was ten meg — well, basically anybody in an area that that wasn’t capable of getting ten meg in West Virginia wouldn’t be served in West Virginia. Very few providers are providing that level of service out in the rural area. It would eliminate broadband for a very large segment of West Virginians.”

But the bill prohibits promising high speed internet — defined as 10 megs — and not providing it. You are not required to provide it everywhere. But you are prohibited from saying you were providing it if you weren’t providing it.

“Again, I haven’t fully looked at the bill, but that would be one of the consequences,” Espinosa said. “If the definition of broadband were ten meg or 25 meg, a lot of customers in West Virginia would not have access to any broadband at all.”

Espinosa was asked whether he is doing anything to block the legislation from coming forward.

“Absolutely not,” Espinosa said. “I haven’t read the legislation, aside from talking with Delegate Smith directly, where he indicated he was going to introduce it. It’s not something I’ve been involved with here at the legislature. I have taken a hands off approach.”

“The question does come up from time to time,” Espinosa said. “I do work for Frontier. This legislation could potentially impact Frontier. But that in and of itself doesn’t create a conflict under the rules.”

Espinosa compared his potential conflict with trial lawyer delegates in the legislature dealing with so called tort reform legislation.

“This tort reform legislation would in many respects limit some of the large recoveries from multimillion lawsuits,” Espinosa said. “My colleague Delegate Stephen Skinner (D-Jefferson) is a trial lawyer and he has forcefully argued against adoption of that legislation. One could certainly argue that he has an interest in that legislation. If it is adopted, it could certainly impact income to him or his law firm. However, that in and of itself does not preclude him from voting. Under the rules, he’s actually obligated to vote. There is nothing that precludes him from actively and forcefully advocating against that legislation. And he voted on every piece of that (tort reform) legislation, which is clearly is required under the rules.”

Espinosa said that if either HB 2551 or HB 2552 came to the floor of the House of Delegates, “I certainly would request to be excused from voting, but I would anticipate that I would be directed to vote, because while I might have some interest in the legislation, it would be as a member of a class — impacting all broadband providers across the state as well as all of their employees.”

Espinosa said that “every case is unique.”

“We just took up legislation relating to regulations of the coal industry,” Espinosa said. “I fully supported that legislation. Delegate Smith spoke to that legislation, explained why it did not adversely diminish safety and why it would be beneficial for West Virginia. Delegate Smith is a section supervisor for a coal mine. That in and of itself does not require that a legislator be excused. In fact, they are required to vote.”