Last night, the Morgan County Planning Commission gave the green light to preliminary plans to put a Dollar General at the corner of Oakland Road and US 522 ten miles south of Berkeley Springs, West Virginia.

Planning Commission member Jim Hoyt voted no on every item. 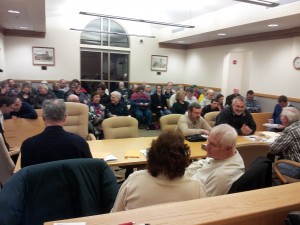 Scott Swaim voted no on one item.

Wayne Omps abstained on all votes.

In a controversial move last year, Cacapon South developer Patrick McCuan, through his McCuan Development Group (MDG), sold the corner lot to Cross Development — which will lease it to Dollar General.

“I heard that there were people at the meeting last night who spoke in favor of the Dollar General,” McCuan said in an interview today from his home in Florida. “And in the end, the Planning Commission approved the proposal.”

In fact, more than 70 people turned out last night to oppose the Dollar General.

A handful of residents — including Ginger Johnson, who works at the courthouse — spoke out in favor of the Dollar General proposal.

Many of those opposed to the Dollar General came from the neighboring Cacapon South development.

Dollar General was represented at the meeting by Josh Allen of Cross Development.

McCuan was represented by Justin Cowles.

Salen successfully developed Cacapon South into an award winning property — with 140 of the 141 lots sold. 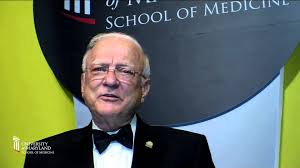 Now, like virtually every Cacapon South property owner, Salen is opposed to McCuan’s commercialization of the corner property.

Last night, Salen was one of many who spoke out in opposition to the Dollar General.

“If you look up at this monster (Dollar General) sitting up there on the hill (in Berkeley Springs) and picture that down on Oakland Road — it’s going to be disgusting,” Salen told the Planning Commission last night.

In a letter to the Morgan Messenger last week, Salen and Karen Ragan urged McCuan to “abandon the commercialization” of the property.

But McCuan said today that he would not — that in fact he can not — pull the deal with Dollar General off the table.

“I don’t have the ability to pull the deal off the table,” McCuan said. “We are under contract.”

What would McCuan think if Dollar General decided to drop a store across from his Sunset Hills at McCuan Farms estate in Woodbine, Maryland or outside his neighborhood at the Cypress Woods development in Naples, Florida?

“That’s irrelevant,” McCuan said. “I’m not going to answer that.”

McCuan said he was surprised by the opposition to the Dollar General store from the residents of Cacapon South.

“I thought they would welcome the opportunity of having that kind of facility so they wouldn’t have to drive into town,” McCuan said.

Would McCuan welcome the opportunity of having a dollar store put right next to one of his homes in Florida or Maryland so he “wouldn’t have to drive to town”?

“Like I said, I’m not going to answer that question,” McCuan said again.

In a letter to the Planning Commission last week, south Morgan resident Paul Stern laid out a number of ways the developer’s application did not meet requirements in Morgan County’s subdivision ordinance.

“The Morgan County Planning Commission yesterday approved an application for construction of a Dollar General store that did not provide the information required by the subdivision ordinance,” Stern said today. “These deficiencies were brought to the Commission’s attention in writing prior to the hearing, but none were even considered or discussed by the Commission.”

Stern said the subdivision ordinance “clearly lists the elements of a complete application and any related waiver requests.”

“There is no question that this application did not contain the information required by the ordinance or even claim to meet the standard for rule waivers,” Stern said.

“This missing information was directly relevant to our central objections to the Dollar General proposal,” Stern said. “It would have been an easy matter for the Commission to request that the applicant comply with the ordinance and submit a complete application. Yet they declined to do so. Instead they apparently decided that the incomplete application was sufficient.”

In his February 12 letter to the Commission, Stern cited many examples of the developer’s failure submit a proper application.

“All were ignored by the Commission,” Stern said.

The Commission did take into consideration a memo provided by Cacapon Associates supporting the Dollar General application. That memo was submitted on February 11, 2015 to the Commission. But Stern says that while he asked for all submissions from the developer, he was not given a copy of the Cacapon Associates memo.

The Commission has previously maintained that “if the rules of the subdivision ordinance are followed then the development application must be approved.”

Stern said that a more accurate statement would be that “even if the clear requirements of the subdivision ordinance are not followed, we will approve the application if we want to.”