You would think that with Mountain View Solar right here in Morgan County, Senator Charles Trump would protect those — left, right and center — who want to be self-sufficient, those who want to be independent of the large the electric power companies, those who rely on solar energy for their electricity needs.

But during this legislative session, Trump, who is chairman of the Senate Judiciary Committee, has consistently sided with West Virginia’s most powerful special interests — the coal industry, the oil and gas industry, and now the power companies — against the broader interests of the people of West Virginia.

And now Trump is standing behind legislation — HB 2201 — that was written by the lobbyists for American Electric Power and FirstEnergy.

The battle between the solar energy activists and the big power companies, which has unfolded over the past couple of weeks in Charleston, revolves around the concept of net metering.

Net metering gives residents of West Virginia who use solar energy, full retail rate credit for the surplus energy they provide to the grid through rooftop solar and other means.

In the past, Trump has been supportive of laws that protect net metering laws.

But over the past couple of weeks, he has accepted power company language inserted into HB 2201 that undermines the law’s protection of solar energy customers.

According to John Christensen, a lobbyist for Mountain View Solar, HB 2201 started out as a bill to protect net metering. 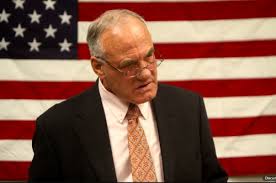 “There was a fear that HB 2001, which was passed into law earlier this session, didn’t sufficiently protect net metering,” Christensen said. “Delegate Stephen Skinner and Barbara Fleischauer and others came together to try and fix it with HB 2201.”

“Charles was pretty good at the beginning,” Christensen said. “On Thursday, February 5, Charles put the bill on the Senate Judiciary Committee agenda. I found out about it around noon. I went over to see Charlie. I told him that we had a problem with it. Charlie pulled it off the agenda and he then he arranged a meeting between all the principals to discuss and negotiate a compromise. We had the meeting in his office. There were twelve people in the meeting — maybe three or four power company lobbyists, a couple of Senate Judiciary Committee lawyers — Tom Smith and Tom O’Neil —  Charles, myself, Senator Mike Romano, and the general counsel for the Public Service Commission — Rick Hitt. The solar activist Bill Howley was on the phone.”

The meeting lasted for about an hour — from 4pm to 5pm on Thursday, February 5.

“We didn’t leave with a compromise,” Christensen said. “We left with the idea that we would continue to discuss the problem and try and reach a compromise.”

“I looked at the list and was surprised that they were going to try and add these new provisions that we hadn’t discussed at the meeting,” Christensen said.

“It was like — here’s the list, this is what we are going to do, take it or leave it,” Christensen said.

Christensen said he talked it over with Howley and they decided to object.

As a result, Christensen wrote the word “unacceptable” on the top of the piece of paper and gave it to the lawyers for the Senate Judiciary Committee.

But that didn’t stop the Judiciary Committee and then the full Senate from passing HB 2201 and sending it over to the House of Delegates.

Christensen said he ran into Trump on Thursday, February 12 at a reception and Trump said to him — “We’re okay on net metering, right?”

Christensen said “no, we are not okay.”

Christensen says he tried to propose compromise language but that it didn’t go anywhere in Trump’s Senate Judiciary Committee.

Goldwater says that “as a son of Arizona, I know we have no greater resource than the sun.”

“Republicans want the freedom to make the best choice and the competition to drive down rates,” Goldwater says. “That choice may mean they save money, and with solar that is the case. Solar companies have a track record of aggressively reducing costs in America. We can’t let solar energy — and all its advantages and benefits it provides us — be pushed aside by monopolies wanting to limit energy choice. That’s not the conservative way and it’s not the American way.”

“AEP and FirstEnergy monopolies have repeatedly deceived legislators to sabotage energy freedom in West Virginia,” TUSK says. “As currently written, HB 2201 will allow utilities to shut out free market competition by forcing the Public Service Commission to impose fees and taxes on customers. It will destroy the state’s developing solar industry and will end any chance of solar jobs coming to the state. Leaders of rooftop solar agree this legislation will kill the rooftop solar industry. HB 2201 is absolutely not a compromise.”