In July, the Hancock Arts Council presented a revival of the Hee Haw television show, featuring local musicians playing music from a string of greats like Hank Williams, Roy Acuff and Buck Owens.

“An hour before the show started we opened the doors and I looked out the windows and I saw people lined up clear around the building,” Ward told Russell Mokhiber of This Week in Morgan County. “They just kept coming. The cars were parked everywhere, and about 45 minutes before the show started I peeked out the curtain, and it was packed. They were bringing chairs in, people were sitting in the aisles. I looked over the stage, and people were right there in front. And they were standing all along the sides and in the back, and we had to turn away about 250 people.” 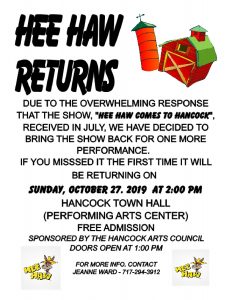 That’s 450 jammed inside the Hancock Community Center. And another 250 turned away.

Ward says it was so popular that the Arts Council has scheduled another Hee Haw show for Sunday October 27 at 2 pm at the Hancock Community Center, 126 W. High Street in Hancock, Maryland. Doors open at 1 pm.

There are no tickets for the event, although donations are encouraged at the door. Ward says that the Arts Council raised more money at the July 26 event than they have raised at any other event.

Ward anticipates another capacity crowd. She recommends that if you want to get in, come early.