West Virginia Leads the Nation in Deer Crashes in November 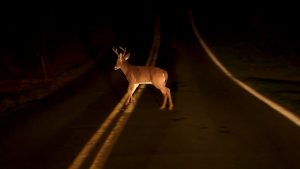 That’s according to an analysis of claims from 2006 to 2018 conducted by the Highway Loss Data Institute.

Animal-strike-related insurance claims are more than twice as frequent as the yearly average in November, when the search for a mate keeps the big bucks on the move.

The severity of claims, measured in dollars insurers pay to cover losses, also soars during the peak month.

The cost of deer crashes has been increasing steadily, mostly due to higher-priced cars and components.

The claim frequency in West Virginia – 47.8 claims per 1,000 insured vehicle years – was more than three times the national average for the peak month.

“The claims follow a very consistent pattern in line with the mating and hunting season over the years, rising rapidly in October, peaking in November, and then dropping off in December and January,” says Matt Moore, senior vice president of HLDI.

“Adapting pedestrian crash prevention systems to detect animals as well as people in the roadway could help avoid many of these collisions,” says Moore.

Some automakers say their systems can also detect animals, but IIHS hasn’t tested these claims.