More than 150 people gathered at the Charles Town, West Virginia Library in Jefferson County last night to protest a proposed 463,000 square foot Rockwool plant in Ranson that will produce home and industrial insulation from slag and basalt. 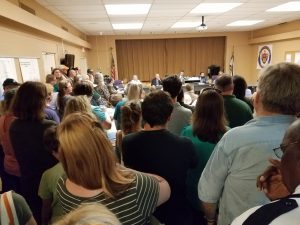 A group calling itself Citizens Concerned About Rockwool (with more than 4,000 Facebook members) says that the plant will produce toxic air pollution in an area that has four public schools and two daycare centers within two miles – housing fully thirty percent of Jefferson County’s student population. The North Jefferson Elementary School sits across Rt. 9 from the proposed facility.

Citizens gathered last night to confront the Jefferson County Commission, which was holding a hearing in the basement of the library.

But the room was quickly filled and the overflow spilled out up the stairways, back into the library and out to the front lawn of the library. 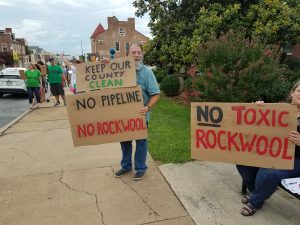 While the Commissioners were holding their hearing downstairs, outside citizens held signs – Rockwool is Full of Bull, No Pipeline, No Rockwool, No Toxic Rockwool – and sought to get drivers passing by to honk in opposition to the Rockwool plant. 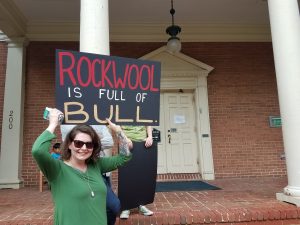 Regina Hendrix, of the local Sierra Club group, said that “the air pollution permit for Rockwool is alarming and the site location is absurd.”

“Giant smokestacks that will emit huge amounts of hazardous air pollution adjacent to our schools – what is Jefferson County thinking?” Hendrix asked.

“Clearly nobody thought it through. Rockwool is within 10,000 feet of thirty percent of Jefferson County’s entire student population.” 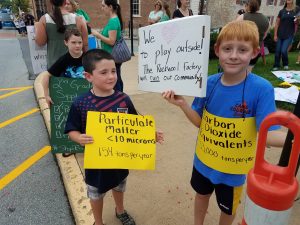 “Even worse, the state won’t even bother to study the impact of Rockwool’s pollution on nearby schools. There’s no way anyone can have confidence that this is a safe situation for our children and their teachers.”

“Kids need fresh air, not formaldehyde and PM 2.5, when they’re running around at recess or playing sports at Jefferson High.”

“The Jefferson County school board must take action to protect its students and employees,” Hendrix said. “We’re urging officials to pause site development at Rockwool, and for the Board of Education to conduct its own independent, expert study of the actual impact of this pollution on nearby schools.” 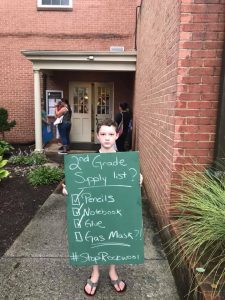 We asked Rockwool’s McLaren – what about the pollutants – like formaldehyde?

McLaren says that all the emissions from the plant will fall within limits prescribed by law.

“We are operating under a permit,” McLaren said. “There is formaldehyde in apples, in your carpet. It naturally occurs everywhere.”

One problem for Rockwool — many of the citizens of Jefferson County work in Washington, D.C.

Jefferson County is in West Virginia, but it is also an exurb of the capital city. Residents there know how corporate power molds law and regulations. They point to a recent article in Politico reporting that “the Trump administration is suppressing an Environmental Protection Agency report that warns that most Americans inhale enough formaldehyde vapor in the course of daily life to put them at risk of developing leukemia and other ailments.”

“Although their product is arguably efficient and well made, the actual manufacturing process pollutes the air,” Citizens Concerned About Rockwool said in a handout titled Stop Toxic Rockwool. “The use of both coal and slag causes the emissions to be toxic in nature.”

“The facility has been approved for heavy toxic emissions, with two smokestacks about 21 stories high,” the group said. “Emissions are estimated at 470 tons of volatile organic compounds and 239 tons of nitrogen oxides a year. Citizens are also concerned about particulate matter – 134 tons a year – which are linked to all kinds of health issues.” 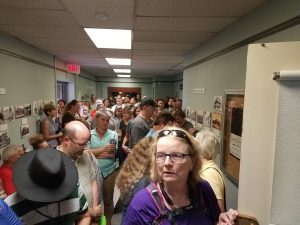 Citizens at the meeting also expressed concerns about the secrecy of the project.

“Details regarding the nature of the operation and opportunities for public input were minimal and framed in a manner that would not reasonably consider public opinion,” the group said.

In the meeting, the Commissioners line was – hey, it wasn’t us – it was the town of Ranson, which cut the development deal with the Danish multinational.  But the political establishment in Jefferson County was secretly behind the deal for years. 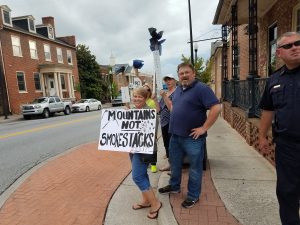 Reisenweber came to a meeting in Berkeley Springs in November 2016 to get Manchin to help push through the TransCanada and Mountaineer Gas pipelines.

At the November 2016 meeting, Reisenweber complained to Manchin that Jefferson County has no natural gas and had lost several economic development projects because of that. And he complained about citizens protesting the pipeline.

Manchin responded by saying “people don’t want any inconvenience on their property” and suggested a way to overcome opposition to the pipeline – the state invests in the Mountaineer Gas line.

“If the state becomes involved, it’s a public project and with eminent domain you can move on it when you need to,” Manchin said.

Tracy Cannon, one of the lead citizen organizers against the pipeline, says the Rockwool facility and the pipeline are intimately linked.

“We have been fighting against the pipeline in our area for two years now and it is currently being built over the objections of many residents,” Cannon said. “Many good friends of mine have had their land seized by eminent domain or the threat of it. Many were also cheated when it comes to the payouts by aggressive land agents.”

“Both the Rockwool facility and Mountaineer Gas’ pipeline were agreed upon in backroom deals where local development authorities and county commissions kept the matter as secret as possible until the permits had been acquired,” Cannon said. “Then they announced the projects as a done deal, in spite of the fact that the communities knew little about the proposals at that point in time.”

“The two projects are also connected to each other in that the gas was required by Rockwool, so Jefferson county officials made sure Morgan and Berkeley counties pushed the pipeline through. And the Rockwool facility is needed so that Mountaineer Gas has a big gas customer to make it worth their while to go into Jefferson county.  One hand washes the other.”

The organizers of the protest last night said that the project is “not a done deal.”

“The facility isn’t built and Jefferson County residents still control our own destiny,” they said. “There are multiple ways we can send Rockwool packing. It just takes you getting involved and getting your neighbors involved.”

“If a simple majority of either the Commission or the Board of Education passes a resolution disapproving of Rockwool’s location next to schools, the project dies. Simply put, Rockwool is not going to build its smokestacks here if any part of our local government states its opposition.”

“We know many of our local officials feel misled about Rockwool’s pollution impact,” they said. “Considering what we know today, how can any public official honestly tell North Jefferson Elementary parents and teachers that the school will be completely safe? Disapproval of Rockwool now, before it is built, is the right thing to do for our schools and our community.”

“So, let’s get to work. Tell our County Commissioners and School Board members that they are accountable for Rockwool’s pollution, and they can fix the situation by simply stating their opposition, individually and as a group, to locating a high-pollution mega factory so close to our children’s schools.”