The West Virginia Supreme Court today directed the lawsuit challenging Tally Reed’s residency to a lower court to establish more of a record. 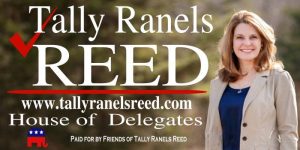 “Upon consideration, the Court is of the opinion that a rule should not be awarded, and the writ prayed for by the petitioner is hereby refused with leave to file in the circuit court to establish a proper record,” the Court ruled in a one page order.

Residents of the 59th House of Delegates district yesterday filed the lawsuit asking the court to disqualify Reed from the May 8th Republican primary.

The residents intend to file in Kanawha Circuit Court as early as today.

“There is an unfortunate, desperate effort by a few individuals to undermine the widespread support our campaign has gained throughout District 59,” Reed wrote on her Facebook page today. “With the primary election less than two weeks away, this is a thinly-veiled attempt to distract voters, and we will respond to these baseless accusations accordingly.”

Reed’s campaign announced earlier this month that they would no longer be granting interviews with reporters or making public appearances until after the May 8 primary.

The Reed case is having political ramifications throughout the region.

Morgan County resident Robert Campbell filed one of many complaints with the Secretary of State’s office, asking that they investigate Reed’s residency.

Campbell received a letter from the Secretary of State’s office dated April 18, 2018.

The letter was signed by Donald Kersey, the Elections Director and Deputy Legal Counsel.

Kersey wrote that the Secretary of State’s office has “legal jurisdiction over the matter,” but that “the administrative complaint procedures do not apply because the allegations may warrant a criminal investigation.”

Tally Reed was the original treasurer of the Friends of Debra McLaughlin campaign committee. And in one of the first fundraising letters to lawyers throughout the Eastern Panhandle, Reed listed the home address where she lives in the 58th district – not the address she is running from in the 59th.

David Hammer is running against McLaughlin in that judicial race and he weighed in today on the Reed matter.

“Judge McLaughlin is surely friendly with Ms. Reed and presumably knows where Ms. Reed and her husband – who himself is a major campaign contributor to the McLaughlin campaign – actually reside,” Hammer wrote on his Facebook page. “Indeed, in January when Ms. McLaughlin’s campaign solicited money from lawyers who appear in her courtroom, the solicitation letter correctly identified Ms. Reed’s true residential address. Yet in Ms. Reed’s sworn statement filed with the West Virginia Secretary of State, she identified a different address as her residence. This is troubling but only Ms. McLaughlin can answer when she first learned of this issue and what she did, if anything, to correct the problem.”

“To me, this highlights the fundamental problem with judicial campaigns soliciting money –  it creates, at a minimum, the appearance of impropriety because people are already questioning whether Ms. Reed may receive special treatment due to her and her husband’s close relationship with Judge McLaughlin. That is why my campaign has refused all campaign contributions – judicial campaigns and money are simply a bad mix.”

“I am in the process of filing an ethics complaint for any misleading information Mr. Hammer chooses to post,” Judge McLaughlin wrote. “We will let the Ethics Commission determine who is unethical in this matter.”