House of Delegates candidate Tally Reed will be doing no more interviews until after the primary on May 8. 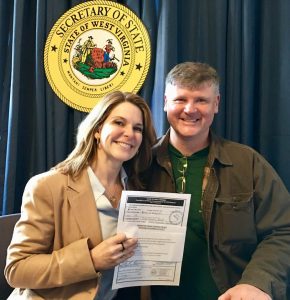 Tally Reed is a candidate for the Republican nomination in the West Virginia House of Delegates District 59, which includes parts of southern Morgan County and parts of western Berkeley County.

She faces off against former Delegate Larry Kump in the Republican primary on May 8.

The winner of that primary will face Democrat John Isner in the November election to fill the open seat left by Delegate Saira Blair, who is leaving the legislature to further her education.

On the WRNR Radio Show Eastern Panhandle Talk with Rob Mario and David Welch this morning, the political talk turned to Reed’s campaign against Kump.

Mario said that Reed is not doing any more media between now and before the May 8 primary election.

“Why is that?” Welch asked.

“I texted Ken Reed who handles her campaign and asked if she would come on the program and he said – we just did our last interview,” Mario said.

“That’s the most odd political campaign strategy that I have ever heard in my career,” Welch said. “Four weeks out and we are not going to do any more interviews? The only way you would do it is if she is not very good at it.”

Another panelist suggested that the Reeds believe they have the primary election wrapped up and don’t have to interact with the media to win it.

“I was barraged with texts afterwards from a couple of different people saying – no she does not, that’s a lie,” Mario said. “She insists she does. I don’t know if you have to follow people home at the end of the show to find out what door they walk in or not. But that is buzzing out there about her.”

“And Rob, I can’t mention any names because I have been told this in confidence, but you can be guaranteed that in the general election, the Democrats are going to come after her on that issue,” Welch said. “That will be an issue. Obviously, in a campaign, they would have to prove it.”