The Maryland Department of the Environment will hold a hearing December 19 on the proposed TransCanada Potomac River pipeline project. TransCanada’s proposal — to build a gas pipeline under the Potomac River just west of Hancock, Maryland — is being opposed by citizens throughout the region. 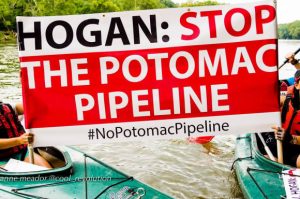 The hearing will take place at the Hancock Middle/High School, 289 West Main Street in Hancock, Maryland.

The project plans will be on display beginning at 6 pm. The hearing will start at 7 pm and end at 9:30 pm.

Tracy Cannon of Eastern Panhandle Protectors, a lead organizer against the pipeline, said that at the December 19 hearing, “the Maryland Department of the Environment will hear from area residents to inform Governor Larry Hogan’s decision about whether to approve or deny Columbia Gas/ Transcanada’s application for a 401 Waterways Permit under the Clean Water Act.”

“Denying the 401 permit would stop the construction of the pipeline in its tracks, and is the best way for Governor Hogan to protect our environment,” Cannon said. “We will rally at the High School/ Middle school at 6pm on Tuesday, December 19th. This hearing is our last stand against this pipeline short of civil disobedience,  They plan to start tree cutting in Morgan County, West Virginia in January.  We need to show them just how many of us oppose this pipeline.  Please come speak out against the pipeline that threatens our neighbors, the Keseckers, and so many others in Morgan County and beyond.”

Last week, the TransCanada Keystone pipeline in the grasslands of South Dakota sprung another leak, this time spilling 210,000 gallons of oil.

On Monday, the Nebraska Public Service Commission will decide whether to approve an extension of the Keystone XL pipeline through Nebraska.

“We’ve always said it’s not a question of whether a pipeline will spill, but when, and today TransCanada is making our case for us,” said Sierra Club’s Kelly Martin. “This is not the first time TransCanada’s pipeline has spilled toxic tar sands, and it won’t be the last. The PSC must take note: there is no such thing as a safe tar sands pipeline, and the only way to protect Nebraska communities from more tar sands spills is to say no to Keystone XL.”