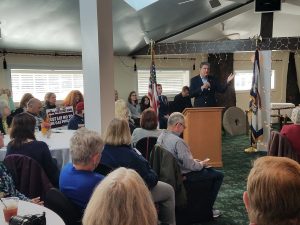 And he was brilliant.

Manchin spoke and took questions for over three hours.

One woman said she and her husband are retired military and on the military health insurance plan TRICARE.

The woman said that they have a granddaughter living in Texas on the CHIP program – that’s Medicaid for children.

The granddaughter has a rare illness and is on medicine that costs $150,000 a month.

Because Congress is delaying renewing the CHIP program, Texas could run out of funds – leaving the granddaughter without access to her medications.

The grandmother – who did not identify herself – said that her and her husband were going to have to move from Berkeley Springs to Texas to adopt their granddaughter so that the granddaughter would be covered by their TRICARE health insurance.

The grandmother wanted to know from Manchin what he could do about preventing Texas from losing funding for CHIP.

Manchin asked the grandmother to give her name to one of his aides and he’d look into it.

But a young high school student then asked Manchin if a single payer system – where everyone is covered in one system – Medicare for all – wouldn’t solve the woman’s problems.

Manchin referred to Bernie Sanders’ single payer bill which was introduced in the Senate last month with 16 other Senators co-sponsoring – not including Manchin.

Manchin said that he would have to study the proposal – “you can’t just jump onto every new idea without studying it” – Manchin said.

Of course, single payer is not a new idea.

It was introduced first by President Harry Truman more than 70 years ago.

And Manchin has heard from single payer advocates in West Virginia for years now – advocates who have made their case over and over again.

Yet Manchin still says that he has to study it.

What he actually means is that – I’m not going to go against the health insurance industry to help the people of my state.

Manchin brushed aside the young high school student with a touch of flattery.

Manchin took a number of questions about the opioid crisis in West Virginia.

In response, he referenced the corruption that allowed for the opioid crisis to flourish in West Virginia, referencing a Washington Post/60 Minutes expose on how three drug distribution companies – McKesson, AmerisourceBergen and Cardinal Health – lobbied Congress to make it difficult for the Drug Enforcement Administration (DEA) to put a stop to their distribution of opioids in Appalachia and elsewhere.

Manchin did not mention the fact that in 2015 Congress passed the legislation by unanimous consent – including the consent of Senator Manchin – before it was signed by President Barack Obama.

One person did get under Manchin’s skin.

And that was Morgan County farmer Patricia Kesecker.

Kesecker told Manchin the story of Mountaineer Gas taking her farmland with the use of eminent domain to build a gas pipeline.

Kesecker questioned the use of eminent domain by private corporations to take farm land.

Manchin expressed surprise that a private corporation would have the right to take the Kesecker property by using eminent domain.

He asked around to his buddies in the crowd – including Republican state Senator Charles Trump and West Virginia House Majority Leader Republican Daryl Cowles – to see if they knew what was going on.

Neither Trump nor Cowles responded.

One woman in the crowed looked at Trump and asked, perhaps sarcastically – “you were trained in the law, weren’t you Charles?”

Of course, Manchin and Trump and Cowles all know what’s going on.

They have been in wholehearted support of the use of corporate eminent domain to take farmers’ property for pipelines.

Not only did Manchin know what was going on.

He was asked about the brewing opposition to the Mountaineer Gas pipeline.

“People don’t want any type of inconvenience on their property,” Manchin said.

Manchin suggested the state could consider investing in the Mountaineer Gas project.

“If the state becomes involved, it’s a public project and with eminent domain you can move on it when you need to,” Manchin said.

And Trump was behind the law, written by the natural gas industry that fast tracked the Mountaineer Gas pipeline through the West Virginia Public Service Commission.

The Trump sponsored law effectively shifts the burden of paying for construction of new natural gas pipelines from the corporation to existing ratepayers in the state.

Cowles was right behind Manchin and Trump in support of the pipeline.