If you want to know why the Democratic Party is dead, dead, dead, look no further than Congresswoman Rosa DeLauro (D-Connecticut). 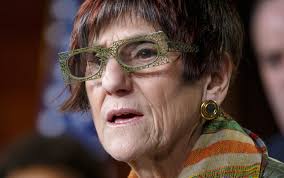 She’s a member of the House Progressive Caucus, which as a group has endorsed HR 676, the single payer bill in the House.

A cool one hundred of DeLauro’s colleagues have co-sponsored HR 676, including a blue dog from Tennessee (Jim Cooper) and a member from Mississippi (Bennie Thompson) (See Single Payer Action’s running total.)

We asked why, but her office did not respond.

DeLauro’s legislative aides have told constituents recently DeLauro would vote for single payer if it came to the floor.

But pushing single payer now is a diversion.

The imperative is to defend Obamacare from the Republican onslaught.

One DeLauro aide told a constituent that when he hears from constituents “Obamacare sucks, we need single payer — it shows they don’t understand the reality in DC that we cannot get a single payer bill even to a vote with the current makeup of Congress and we have to spend all our energy and focus defending what we have.”

But the same aides have said that HR 676 is not good enough — that it lets the Veterans Administration stand and therefore is not true single payer — signaling that she’s for a tougher single payer bill.

“Democrats who, like Rosa DeLauro, support the Affordable Care Act are out of touch with the fact that the ACA can’t be fixed, that the only way to solve our healthcare crisis is to get rid of private insurers and create a single publicly-financed plan such as national improved Medicare for All and that the majority of Democratic Party voters and the public in general support Medicare for All,” said Dr. Margaret Flowers of Health Over Profit.

“We recognize that Medicare for All is off the table no matter which of the major corporate parties is in power and that it will take an organized movement of movements to put it on the table and pass it. We cannot wait any longer for a real solution to the healthcare crisis. Every day, people across the country are suffering and dying from lack of access to necessary care. This is the most important reality — that people are suffering and dying in the richest country in the world because members of Congress are more concerned with politics than with doing the right thing.”

Single payer fueled Sanders’ run through the primaries, but now Sanders is traveling the country with Democratic National Committee Chair and Clinton supporter Tom Perez on a “come together and fight back tour.”

In a joint statement announcing the tour, Sanders and Perez say they will speak out on minimum wage, climate change, infrastructure spending, immigration, tax reform — nothing about single payer.

(Sanders’ aides, who last year took DeLauro’s line and said that single payer was a diversion from defending Obamacare, now say that Sanders will introduce a single payer bill in the Senate sometime soon.)

One reason the 100 members of the House have co-sponsored HR 676 is because at every town hall meeting, single payer is the driving force.

DeLauro too is hearing it from her constituents in Connecticut.

But DeLauro and the four other members of the House — from Connecticut — all Democrats — John Larson, Jim Himes, Joe Courtney and Elizabeth Esty — have yet to relent.