It’s impossible to have a credible unity tour between Bernie Sanders and Tom Perez. 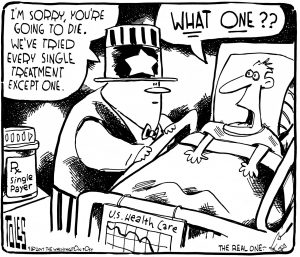 It’s impossible to call yourself a populist a defend a law written by insurance industry lobbyists.

Let’s start with the so-called unity tour just completed with Sanders and Perez.

On MSNBC last week, Chris Hayes had Perez and Sanders on his show.

Yet single payer is the driving force at all the town hall meetings.

And single payer won’t become law without a new political movement that will wash away Perez and the corporate Democrats.

They asked Sanders to defend Obamacare.

Sanders proved it was impossible.

A hair salon owner from Texas confronted Sanders with her dilemma.

LaRonda owns five hair salons in Texas and employs just under 50 workers. She keeps it under 50 because under Obamacare, more than 50 workers means that she has to buy them health insurance.

“How do I employ more Americans without either raising the prices to my customers or lowering wages to my employees?” LaRonda asked Sanders.

Sanders could have answered – “Well LaRonda, if we had my preferred plan – single payer – you wouldn’t have to bankrupt yourself by buying defective high priced health insurance from for profit health insurance companies. Under my plan, every American at birth gets a birth certificate and a Medicare card. They would be covered and you can hire employees to your heart’s content.”

Instead, Bernie answered with this:

“Let me give you an answer you will not be happy with. If you have more than 50 people, you know what, I think — I’m afraid to tell you — I think you will have to provide health insurance.”

In it, Hightower seeks to achieve the impossible  — populist single payer supporter defending a law written by insurance industry lobbyists in an effort to save the corporate Democrats and their insurance industry funders from themselves.

“While Obamacare has flaws that require fixing, overall it’s been a tremendous success,” Hightower writes.

To secure single payer, activists like Dr. Margaret Flowers and Kevin Zeese of Health Over Profit for Everyone are siding with the American people against Obamacare and the Democrats.

Zeese said that “Hightower surprisingly did not mention that 29 million are uninsured, tens of millions have inadequate insurance and that 30,000 people in the United States are dying each year because they do not have access to healthcare under the Affordable Care Act (ACA), nor did he mention the hundreds of thousands who go bankrupt because of medical illness even though they have insurance.”

“Now, with the failure of the ACA — and 30,000 dying can only be called a failed system — and the even worse failures of the two Republican attempts to replace it, there is only one path forward. It has always been the obvious solution but bipartisan corruption in DC by the healthcare profiteers has prevented it,” Zeese said. “Lower the age of Medicare inclusion to birth and improve it so the US has the best healthcare system in the world. A system that is of, by and for the people.”

“Yes, more people have health insurance but their out-of-pocket costs are so high and the coverage is so skimpy that people still can’t afford actual health care and bankruptcies due to medical illness continue unabated,” Flowers said. “In a real perversion of our system, people can now get screenings for disease, but can’t afford treatment once they are diagnosed with a new cancer or other disease.”

“And tens of millions of people remain without health insurance,” Flowers said. “The ACA can’t change that because it will never be affordable to everyone. That’s why we need to end this failed healthcare experiment and embrace the proven solution, National Improved Medicare for All as embodied in HR 676.”