The West Virginia Congressional delegation has refused to hold town halls in West Virginia – for fear of being pelted with questions from angry constituents back home. 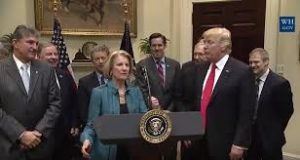 But lo and behold, the entire delegation has now decided to hold a town hall of sorts.

Not in West Virginia.

But in the belly of the beast – the swamp.

That would be Room G-50 of the Dirksen Senate Office Building.

Sponsored by, among others, Merrill Lynch, Orion Strategies, TSG Consulting and United Bank.

And according to a press release from the West Virginia State Society, the entire West Virginia Congressional delegation – Senators Joe Manchin and Shelley Moore Capito, along three members of the House from West Virginia — David McKinley, Alex Mooney and Evan Jenkins — “will offer remarks and spend the evening mingling with West Virginians and friends from around the D.C.-area.”

And there is no fee to attend.

To get your free ticket, sign up here – wvsociety.org.