West Virginia Senator Craig Blair (R-Berkeley County) is sponsoring legislation backed by out of state corporations who funded his campaigns. 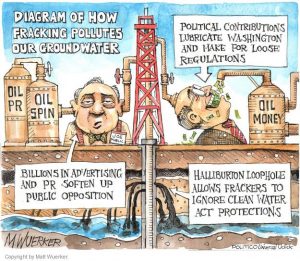 In particular, Blair is the lead sponsor on legislation (SB 245) that would give gas pipeline companies the right to trespass on private property, an issue close to the hearts of many of his constituents who are fighting off the Tulsa, Oklahoma based IGS Utilities Mountaineer Gas pipeline that would cut through prime farmland in Morgan and Berkeley counties.

Blair is also the lead sponsor on SB 244, a bill that would allow gas drillers to force owners of gas reserves to allow horizontal drilling through their property, even if the owners do not want to sell their gas.

Why would a property rights defender like Blair sponsor legislation that would give giant out of state multinationals the right to trespass on his constituents’ property?

Let’s go to the videotape.

Or in this case, the West Virginia Secretary of State’s Campaign Finance Reporting System.

Much of that came from fossil fuel company political action committees.

Who are these companies, where are they from, and what do they do?

FirstEnergy is an energy utility based in Akron, Ohio. FirstEnergy operates in West Virginia through Mon Power and Potomac Edison.

EQT Production is the Pittsburgh, Pennsylvania based natural gas fracking giant.  Seventy-eight percent of the company’s total proved reserves are located in the Marcellus shale region of the Appalachian basin.

Dominion Energy is the Richmond, Virginia based energy company that delivers natural gas to West Virginia.

Marathon Petroleum is the Findlay, Ohio based petroleum refining, marketing and transportation company.

Alpha Natural Resources in the Kingsport, Tennessee based coal company.

Williams Companies is a Tulsa, Oklahoma based natural gas processing and transportation company.

And Exxon Mobil is the the Irving, Texas based oil and gas multinational giant.

The bills Blair is sponsoring — SB 244 and SB 245 — are supported by his corporate funders.

SB 244 would allow gas drillers to force owners of gas reserves to allow horizontal drilling through their property, even if the owners do not want to sell their gas. If 51 percent of mineral owners in a “pool” consent to a lease, gas companies could take the gas from the other 49 percent.