More than 50 people gathered at the C&O Canal in Hancock to protest against the proposed Columbia Gas pipeline that would cut a path under the Canal and the Potomac River to carry fracked gas from Pennsylvania to a new proposed Mountaineer Gas pipeline in West Virginia. 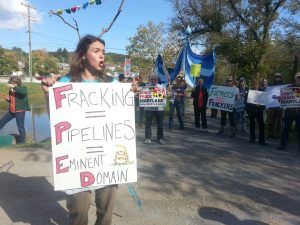 The protesters met two women — Kimberly Alexander and Aeryn Boyd — were are marching  along the canal from Oakland, Maryland to Washington, D.C. to draw attention to legislation in Maryland that would ban fracking in statewide. 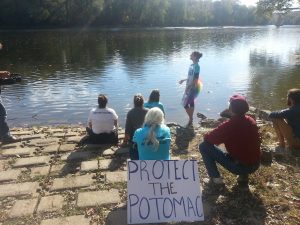 If passed into law, Maryland would be the first state to ban fracking by legislation. New York has effectively banned fracking administratively.

The protesters carried signs that read “Water is Life, Keep it Clean,” “Health Over Wealth,” “Farmers Not Fracking,” and “No to Eminent Domain, Pipeline and Fracking,” “Protect the Potomac,” “Planet Over Pipelines,” and “You Can’t Drink Gas.”

The group heard from Alexander and Boyd about their walk across Maryland against fracking and then marched from the Canal into Hancock up the main street to Buddy Lou’s and then back again to the Canal, where some gathered at the banks of the Potomac. 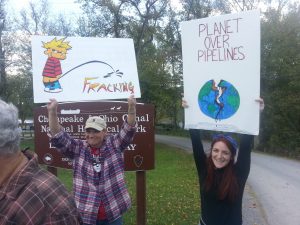 Many in the group were from West Virginia, where a growing group of people are meeting twice a month to protest the pipeline.

This group has put up a letter to the Kevin Brandt, superintendent of the C&O Canal National Historical Park and Jonathan Jarvis, Director of the National Park Service, calling on them to reject the Columbia Gas pipeline proposal to put a pipeline under the Canal and the Potomac River. 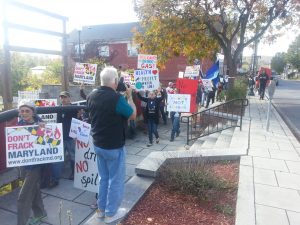 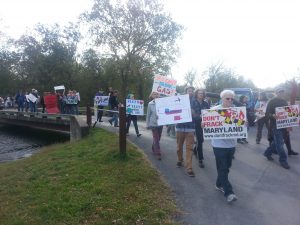