The Morgan County Public Library will present its fall fundraiser, a USO Show featuring music and stars from the 1940’s. 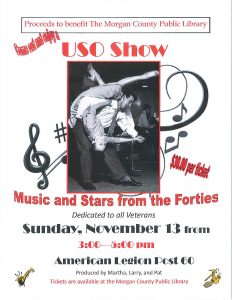 The show will be held at 3 p.m. on Sunday, November 13 at the American Legion Post in Berkeley Springs.

Singers, dancers and musicians from the area, many of them young people, will portray stars of the World War II era.

The show is directed and produced by Martha Lynch and Larry and Pat Springer.

The event, just two days after Veterans Day, is dedicated to veterans.

Any World War II veteran may attend for free.

All proceeds will benefit the Berkeley Springs Public Library.

The Voice of Firestone – Kathy Seager.

And a comedy number with Abbie  Brown and Charles Balkan.