Capito and Foot on the Throat Politics in West Virginia

Capito was asked about her opponent, Secretary of State Natalie Tennant, accusing Capito of insider trading.

“It very much upset me,” Capito said. “It’s not what people wanted to hear. It wasn’t true. And in the end, they didn’t buy it. My campaign was going to put my foot on whoever’s throat was coming after me. I know that if you let up for a minute — complacency is dangerous. I wasn’t ever going to get complacent. I decided I’m not going to let anybody take this from me — from us.”

They all have reputations of being “nice” people.

But they are “nice” people who believe in foot on the throat politics.

They all benefited from race baiting ads that cluttered the mailboxes of West Virginia voters, including one from Go West Virginia Inc. that landed in mailboxes across the state on the Saturday before the election.

The mailer showed a picture of a menancing Barack Obama covered in a red tint with the tagline — EPA’s War on Coal, Failed Obamacare, Failed Education System. 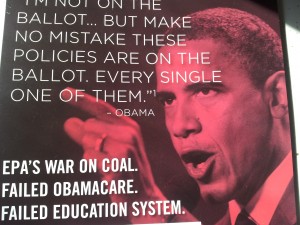 And now that they are elected, it will be their feet on the throats of the people of West Virginia.

Take the issue of raising the minimum wage.

There is no question that if raising the minimum wage to $10.10 an hour were on the ballot in West Virginia on Tuesday, it would have passed overwhelmingly.

And yet, Cowles, Blair, Trump, Capito and Mooney — will all fight off any effort to increase the minimum wage.

Last Sunday, in a debate in Romney, Trump spoke out forcefully against the idea of a minimum wage.

During the interview yesterday, Kercheval asked Capito about Senator Harry Reid not allowing for debate on certain issues.

“People would rather hear your opinion,” Capito said.”They would rather have you debate the issue, rather than hide from it. Maybe people don’t agree with you all the time. I don’t think people expect to agree with you all the time. But they do expect you to form an opinion and have a pathway to do what you think is the right thing to do. But if you are not even bringing it up, you are not even giving people a chance to explain why I’m for this, why I’m not for this, why I think it could be better. The American people just want to be talked to as adults in a straight way.”

Of course, for years Capito has refused to discuss the issue of raising the minimum wage.

At a rally in Romney last month, she refused to answer a question about it and ran away from the reporter who was trying to ask the question.

She has repeatedly refused requests for a town hall meeting to discuss the issue. More than 400 of her constituents have signed a petition asking for such a meeting — to no avail.

“They would rather have you debate the issue, rather than hide from it,” Capito said.

Or run from it.