The idea that Democratic State Senator Donald Cookman and his Republican challenger Charles Trump are similar politicians with similar backgrounds and similar views was put to rest last night at the Tea Party sponsored debate in Romney, West Virginia.

More than 100 people attended the debate at the Coca Cola Bottling Works on a Sunday afternoon. (Breaking news — Citizens give up football to watch politics.)

True, Cookman and Trump are both trial attorneys.

True Cookman and Trump are both former prosecuting attorneys.

And true they were in general agreement on many issues — including guns, abortion, marriage — they both said they were for marriage — and pushing back against the Environmental Protection Agency.

But when it comes to fundamental questions of political economy, Cookman and Trump presented a clear choice to the voters of the 15th Senatorial district.

Most stark was the difference between them on the minimum wage.

Earlier this year, Cookman voted for increasing West Virginia’s minimum wage by $1.50 to $8.75 an hour.

And he said he didn’t think that went far enough. Cookman says he supports a living wage.

“I voted in favor if it,” Cookman said. “But I will go further and say that the minimum wage should be a liveable wage. Anybody who is willing to work a 40 hour work week should be able to support themselves.”

Cookman said that it is virtually impossible for a person to live on the current minimum wage.

“We should make it a liveable wage,” Cookman said. “A high tide floats all boats. If we have a liveable wage, that will improve our business climate. There will be more money spent in our economy and it will make it better for all of us.”

Trump positioned himself on the right fringe of the Republican Party by arguing against the minimum wage. 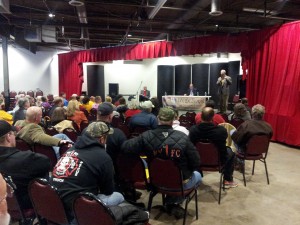 Even the leader of his party in West Virginia — Congresswoman Shelley Moore Capito, who is running for U.S. Senate — says she supports the minimum wage and voted in 2006 to raise it.

“The truth is this — when government interferes in the market in that manner, it eliminates jobs,” Trump said. “It just does.”

Trump said that one reason for the high unemployment rate among young people is the minimum wage.

Cookman and Trump also were on opposite ends of the divide on requiring a prescription for pseudoephedrine.

Pseudoephedrine is used to make methamphetamine.

Cookman voted earlier this year for a bill — which was killed by pharmaceutical industry lobbying pressure — that would have required such a prescription.

Cookman pointed out that there are alternate pseudoephedrine products — including one called Nexafed — on the market that cannot as easily be made into meth and that would not require a prescription under the legislation he voted for.

Trump said he is opposed to the law.

Cookman addressed the question of being attacked by a flood of negative ads.

“I’ve had attacks on my family,” Cookman said. “I’ve had flyers come out in the mail saying that I am against guns. I’ve had little girls come up to me and ask — are you going to take my guns? And I’m endorsed by the NRA.”

“There are push polls — people making calls to homes saying I’m against seniors and children. And I’ve been selected as the champion of children in the state. But yet, I’ve had these false statements coming out saying that I am against children and against seniors.”

“The Citizens Against Lawsuit Abuse (CALA) is saying — you have collected all of this money from trial lawyers,” Cookman said. “That is terrible. You shouldn’t be doing that. You are obviously bought by trial lawyers.”

Trump reiterated that he “admires and respects” Cookman.

“The case I would make is based on areas where Don and I view things differently,” Trump said. “Don — I want you to know — and I hope you do know — that advertising materials that you talked about — and I got some of them in the mail — are not anything that I had anything to do with. You know that right?”

“You know I have nothing to do with those mailings,” Trump said. “I haven’t sent them. I haven’t arranged for them. That is the price we pay, apparently, for living in a free country where other groups can send out whatever they want and express their voices. Some of it is harsh. Some of it is offensive. But those do not come from my campaign.”