The one thing you hear about Charles Trump, Daryl Cowles and Saira Blair — Morgan County’s elected representatives to Charleston — is that they are decent family people.

And who could argue?

From all indications, they are just that. 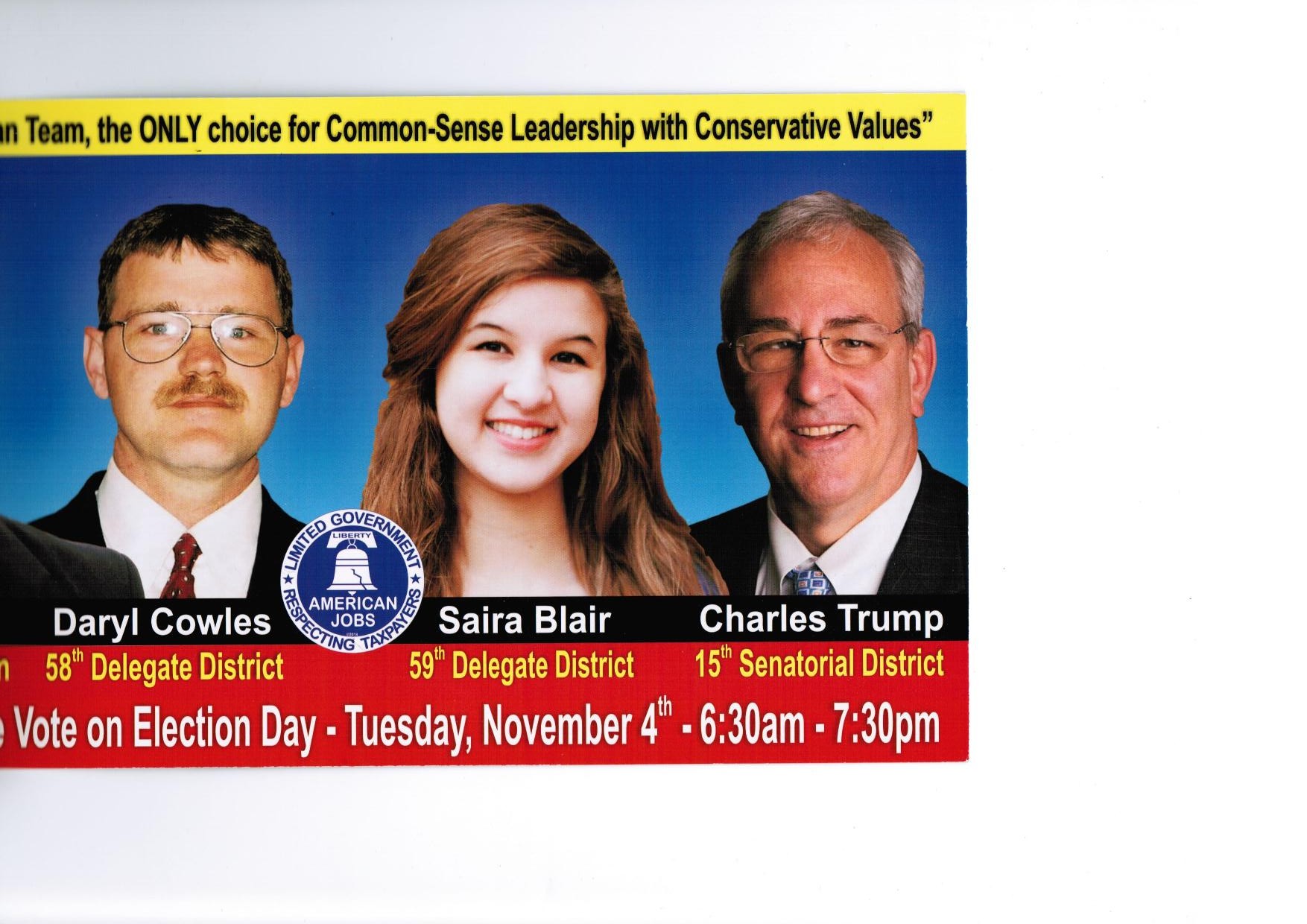 But Trump, Cowles and Blair are all advocates of cruel policies that will hurt working West Virginia families.

All oppose raising the minimum wage.

And all favor union busting legislation that will reduce wages and income, increase poverty and infant mortality rates, and lead to higher rates of death on the job.

The union busting legislation — known by it’s corporate propaganda term — right to work laws — will be pushed by the new regime in Charleston early next year.

In the past, Governor Earl Ray Tomblin has come out against this legislation, but given the new political dynamics in Charleston, the inside betting is that Tomblin will buckle and go with the flow. (In West Virginia, it’s not about Democrat or Republican. It’s about corporate power. For more on this, see Ken Ward Jr.’s recent piece at his blog Coal Tattoo.)

The union busting legislation that Trump, Cowles and Blair all support creates what is known as a free rider problem.

It would allow West Virginia workers to opt out of paying union dues — while at the same time benefiting from union negotiating power that delivers higher wages and safer workplaces.

The non paying workers in effect get a free ride.

True conservatives are opposed to right to work laws. They argue that the legislation represents government interference with corporations’ ability to freely negotiate contracts with workers.

Even Milton Friedman, the father of the conservative Chicago School of Economics and author of the classic Capitalism and Freedom, opposed right to work laws.

Liberals argue that the legislation allows bosses to fire workers without cause.

“‘Right to work’ sounds like a law guaranteeing you a job, or at least protecting your job once you’ve got it,” Michael Kinsley wrote in a piece in Bloomberg News titled The Liberal Case Against Right to Work Laws. “A lot of the propaganda by the Chamber of Commerce and similar business groups is about so-called forced unionism. In fact, it’s almost the opposite. The main effect of right-to-work laws is to outlaw regulations of employment and allow your boss to fire you without cause.”

Kinsley makes the point that under the union busting legislation, “people could enjoy the benefits of union membership, including negotiation of wages, without sharing in the cost.”

“Not only was this unfair to those who did pay their share, but it made organizing a union significantly harder,” Kinsley writes. “Why should I pay union dues if my fellow workers don’t?”

But there’s an iron fist in that velvet glove.

Right wing politicians use the laws to weaken worker power.

By weakening unions, these laws — currently in 24 states — lower wages and living standards for all workers in those states.

Workers in these 24 states earn on average $5,680 less year than workers in other states.

So, take another look at that mailer you received.

It is punctuated with a quote from Ronald Reagan, who, as an actor, served as president of Hollywood’s most powerful union, the Screen Actors Guild, from 1947 to 1951.

“Freedom is never more than one generation away from extinction,” Reagan is quoted as saying. “We didn’t pass it to our children in the bloodstream. It must be fought for, protected, and handed on for them to do the same, or one day we will spend our sunset years telling our children and our children’s children what it was once like in the United States where men were free.”