Early voters in Morgan County, West Virginia will have to pick up the pace to match the early voting total in 2010 — the last non-Presidential election year.

According to the West Virginia Secretary of State’s office, 919 citizens of Morgan County voted early as of yesterday. 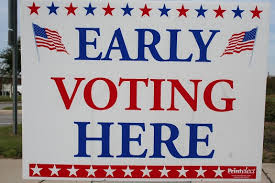 That means that about 152 voters will have to vote on each of the last three early voting days — Thursday, Friday and Saturday — for the early voting total to surpass the 1,373 who voted early in 2010.

Many citizens are opposed to early voting.

“For all its conveniences, early voting threatens the basic nature of citizen choice in democratic, republican government,” they argued. “Especially in an age of so many nonpolitical distractions, it is important to preserve the space of a general election campaign — from the early kickoff rallies to the last debates in October — to allow voters to think through, together, the serious issues that face the nation.”