The West Virginia Legislative Rule Making Committee yesterday moved to close a loophole in state law that would have allowed radioactive Marcellus shale waste into the LCS Services Landfill in Hedgesville, West Virginia.

The Committee unanimously passed a rule that provides that “a commercial solid waste facility that is located in a county that is, in whole or in part, within a karst region as determined by the West Virginia Geologic and Economic Survey, may not accept drill cuttings and drilling waste generated from horizontal well sites.” 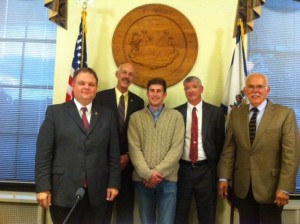 The Eastern Panhandle is a karst region.

Karst topography is a landscape formed from the dissolution of soluble rocks and is characterized by underground drainage systems with sinkholes, dolines, and caves. It is porous and exceptionally vulnerable to water contamination and pollution.

Clint Hogbin, chairman of the Berkeley County Solid Waste Authority, said that the passage through the committee was a “giant step forward,” but warned that the rule was not final until the full Senate and House pass it. They will take it up when the new legislature convenes in January 2015.

Hogbin says that the LCS Services landfill has yet to accept Marcellus waste and that it is unlikely that it will before the legislature takes up the measure in January.

The Committee is comprised of six Senators and six members of the House of Delegates.

Hogbin said he was concerned about Pennsylvania fracking waste finding its way down I-81 into the LCS Landfill in Berkeley County. He said that fracking waste from West Virginia is currently being disposed of in five landfills.

Hogbin said that the Waste Management landfill in Harrison County takes in more Marcellus waste than the rest of the state landfills combined take in regular garbage waste.

Earlier this year, the West Virginia legislature passed a law  — HB 107 — that allowed the industry to dump unlimited amounts of drilling wastes in segregated cells at certain municipal waste landfills.

The law also allows municipal waste landfills without special cells — like the Eastern Panhandle’s only landfill — the LCS Services Hedgesville landfill — to accept Marcellus waste — but it cannot exceed its tonnage limits.

Hogbin says that the Hedgesville landfill has yet to accept any drilling waste, but it nevertheless has the legal authority to do so, even though its sits atop a significant karst region.

Hogbin said that Senator Donald Cookman (Hampshire) first identified the loophole and tried to close it earlier this year, but his efforts were turned back by the House of Delegates.

Cookman then began pushing for a rulemaking fix.

Yesterday, Cookman praised the work of the rules committee.

“It was imperative that the Legislative Rule-Making Committee pass the provision in order to further protect West Virginia’s water,” says Cookman. “I vow to continue working with my fellow lawmakers and the citizens of this great state to make sure West Virginia’s waters remain pure and free of pollution.”