Brooks McCumbee on The Schools, The Levy, The Rich and The Trash

Brooks McCumbee is running for a seat on the Morgan County Board of Education.

He’s also in the leadership of a group working to defeat the school levy — aptly named Citizens Against the Levy.

They have a clear and concise web page.

And McCumbee runs his own Facebook page, where he is in constant combat with the pro-levy forces.

The special election will take place on May 13.

McCumbee, Jeannie Ford and Frieda Ickes sued the school board, claiming the election should have been held in November not in May. But that lawsuit was rejected earlier this month by Jefferson County Judge David Sanders.

The case is on appeal to the West Virginia Supreme Court. The appeal won’t be heard until after the election. If the levy loses, the appeal will not be heard and the case will be over.

McCumbee says the reason he’s running for Board of Education is because “there is too much waste in the school system right now.” McCumbee says too much money is being spent on cell phones, hotels, teachers pay, coaches and excess service personnel.

McCumbee believes that fully a third of what he believes to be the school system’s 350 or so employees are against the levy.

“If they cut back on some of their wastefulness, maybe they could get the teachers to buy in a little bit more too,” McCumbee said. “It’s hard to get people at the school level to buy into things when the board office is so wasteful.”

If elected, he will seek to cut the superintendent David Banks salary from the current $101,295 to $90,000 and the Board Treasurer’s salary from the current $83,000 to $50,000. He would also do away with the position of assistant superintendent. He would not renew the summer program Energy Express, which was axed after the defeat of the levy last year.

McCumbee says he favors advanced placement programs for juniors and seniors in high school. But when asked about claims that those programs will be affected if the levy goes down, McCumbee called the school board “a bunch of liars.”

“They will say anything, do anything, twist it anyway to get the levy attempted to be passed,” McCumbee said.

“Now they are lowering it to 70 percent, which is still too high,” McCumbee. “If you want the citizens of this county to vote for something they can afford, you run it at about 35 percent and you will win 80 to 20. It won’t be close because people aren’t against the kids. I would vote for it in a heartbeat at 35 percent. I couldn’t justify not. It can’t have anything in there for supplements for teachers. One hundred percent goes to the kids — school books, maintenance.”

When asked whether he thinks he’s going to win his seat on the school board, McCumbee says he doesn’t know.

McCumbee says that he has lost friends over the levy fight.

“I do have friends who aren’t friends anymore,” he says. “They don’t consider me a friend. But I can separate the issue from friendship. We’ve never had a topic — not even zoning — that was this much of a hot button, day and night, no matter who you run into. It’s on everybody’s lips and minds. That’s great. Embrace debate.”

On his Facebook page this week, McCumbee posted a picture of downtown Berkeley Springs before 1973 — “before the trash started arriving in this area.”

Who are “the trash”?

McCumbee won’t name names. And it’s not easy to pin him down as what he means by “the trash.”

“You’ve got to understand, this town was a nice small town, I’ve lived here my whole life,” he says. “We’ve had the city people, in a lot of cases, come in and take over. A lot of it is what is wrong with the county — not just the town — but the county today.”

Are the city people “the trash” McCumbee is referring to?

“Yeah, because our local people do not have a say anymore in this county,” he says. “The transplants have moved in, taken over, taken control — oh, this is how it’s going to be.”

Are all of the transplants “trash”?

Who are “the trash”?

“You can make a lot of self-conclusions on that,” he says. “You’ve got a lot of people who are involved with so-called new age, for lack of a better term. We don’t need the Ice House down there in Morgan County schools. The Ice House is a big part of what is wrong with Morgan County.”

Would McCumbee close down the Ice House — which is the headquarters for the Morgan Arts Council?

“In less time than you would take to say yes,” he says.

“We were doing quite fine until all the ship-ins arrived,” he says. “We ran our county. We ran it well. We had native leadership. No pressure from outside interests saying — you’ve got to do this because this is a good thing. Well, it isn’t a good thing.”

What percentage of the county is “trash”? 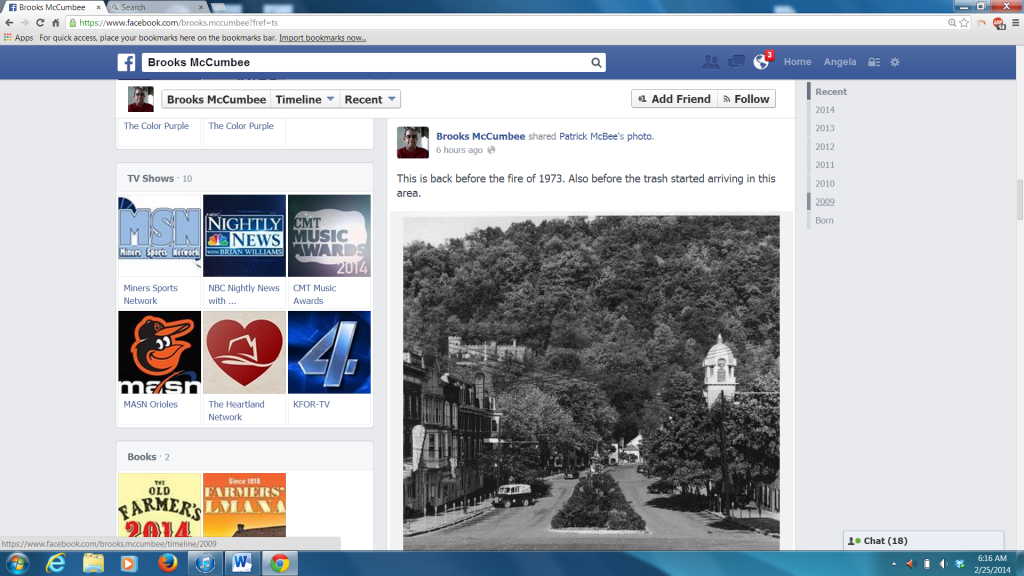 “I would have no idea of a number,” he says. “When they come in, when they try to take over, and run things.”

Should “the trash” leave Morgan County?

“We’d be a whole lot better off if they did,” he said.

Is my family “trash”?

“No, because you conduct yourself in a good way, in a nice manner,” he says.

In McCumbee’s world view, this has less to do with big box stores like Wal-Mart crushing the small towns across America.

Why can’t you buy a new shirt in downtown?

“Because it’s not wanted by those in power,” he says.

That’s because of “the trash” who have moved into Morgan County?

“That would be about 99 percent correct,” he says.

McCumbee works as a referee at the high school and middle school levels.

What if a coach calls McCumbee “trash” — right to his face?

“Well then he’s probably going to get a technical,” he says.

Should we then call a technical on McCumbee for calling his fellow citizens “trash”?

“People do that all the time,” he says. “They fire back at me. And that’s okay. This whole thing, from now until election day, there’s going to be a lot of mud-slinging. It’s like any other issue that gets people’s hair up. But that’s good, because it stimulates the mind, gives people something to talk about. It shows people cares strongly about an issue. Whether they agree or disagree, it doesn’t matter. But it does bring awareness to our kids, our schools and our county.”

In McCumbee’s mind, “the trash” are one problem and “the rich” are another. 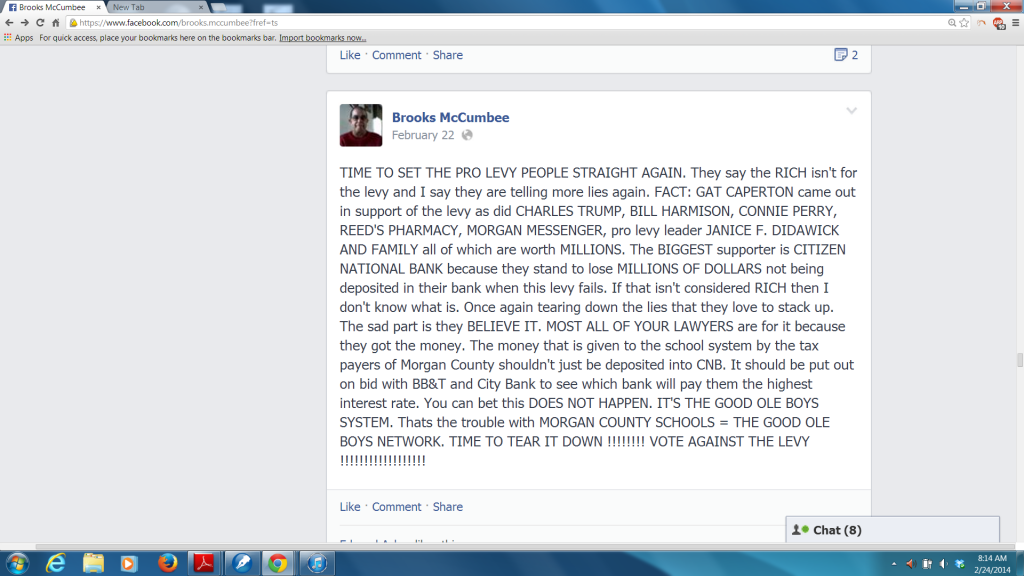 In one post on his Facebook page, dated February 22, McCumbee identifies “the rich” as a driving force in the pro-levy campaign.

“Time to set the pro-levy people straight again,” McCumbee writes. “They say the rich isn’t for the levy and I say they are telling more lies again. Fact: Gat Caperton came out in favor of the levy, as did Charles Trump, Bill Harmison, Connie Perry, Reed’s Pharmacy, Morgan Messenger, pro levy leader Janice Didawick and family, all of which are worth millions. The biggest supporter is Citizen National Bank because they stand to lose millions of dollars not being deposited in their bank when this levy fails.”

We ask McCumbee — what about the wealthy landowners who are funding his organization — Citizens Against the Levy?

“Who would that be?” McCumbee asks.

People like Andrew Gosline, who owns the Berkeley Springs Castle.

Gosline has been a financial supporter of the group, although Jeannie Ford and Gosline would not say how much he has given.

So, what about “the rich” who are fighting the levy? Why doesn’t McCumbee mention them?

Is he opposed to the levy?

“Most definitely and I can’t blame him,” he says. “That’s a big chunk of money.”

McCumbee says everything will be okay “if we can run our own county.”

“The natives of Morgan County,” he says.

How long do you have to be here to be a native?

“The so-called trash come in, and they don’t like it where they came from, but they try to push their ways on us,” he says. “If we wanted that, we would have told them.”

Who ought to leave?

“The Icehousers,” he says. “The Ice House should be put back to what it was when I was a kid — a furniture store. How is the Ice House gang voting on this now, since they have been defeated and not getting their thousands of dollars?”

What if an Icehouser voted against the levy, could they stay?

“More importantly, can they act like the natives?” he says.

If an Icehouser votes against the levy and acts like you want them to act, can they stay?

“We would appreciate it if they did something like that,” he says.

But can they stay?

“They can stay as long as they want, because there is no way you can force them out,” he says.

But you want them to leave?

“As does a bunch of the natives,” he says. “We would love to see them gone.”

We asked McCumbee to predict what the vote will be on the levy in May.

McCumbee predicts the levy will lose — 58 percent to 42 percent.