Former CBS News correspondent Ed Rabel is running for Congress. Right here in West Virginia, the state where he was born and raised. Right here in the Second Congressional District. For the seat being vacated by Congresswoman Shelley Moore Capito.

And Rabel is running not as a Democrat. Nor as a Republican. But as an independent. 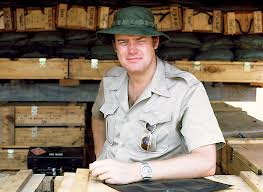 In fact, Rabel was asked to speak at a rally of the Kanawha County Democrats three days before the 2012 election.

His speech to the Democrats was like a slap in the face to both the Democrats and Republicans, both “friends of coal,” consumed as they are with Washington’s “war on coal.”

“If our history is any guide, we should be trumpeting the rights of the working man, promoting diversity both in human rights and in the economy and jumping on the bandwagon for an environment free of pollution and the cancer it causes,” Rabel said. “If we would be true to ourselves, we should be forestalling the endless theft of our patrimony by those outside our state who bear us nothing but ill will.”

“If we truly pay homage to our founding as Mountaineers Always Free, we would be about the business of freedom — freedom from a one-dimensional economy, freedom from the tyranny of political corruption in state and local government and freedom to choose progressive leaders to spur us on in the 21st century.”

After giving the speech, Rabel realized that the Democratic Party in West Virginia was not for him.

“I saw that there really isn’t much difference between the Democrats and the Republicans,” Rabel said. “Voters are fed up with them and that’s why voter turnout is so low. Last year, West Virginia was the only state where turnout was lower than 50 percent. And among the young, turnout dropped by half to less than 23 percent.”

“I’m saying what Democrats ought to be saying but can’t say because they are in bed with special interest groups that fund both parties,” Rabel said.

After traveling the world as a CBS news correspondent, Rabel came home to West Virginia only to find that things haven’t progressed.

“I struggle to find a balance between knowing what I know to be true on the planet of ideas with listening to the meanderings of a backwoods populace so sure there is no verity beyond grandfather’s accuracy,” Rabel writes. “It is tough sledding. To my neighbors, wars and rumors of wars, both military and social, are theories to be prayed away and nothing more. . .The Environmental Protection Agency is a Communist conspiracy out to destroy the coal industry on which the populace has pinned its hopes for generations despite unambiguous warnings about the industry’s imminent demise. Only about 20,000 miners are at work today in West Virginia compared to 126,000 in 1948. Wal-Mart, not coal mining, is the biggest private employer in the state.”

Next year, Rabel will have another book out, a historical novel, titled simply “Coal.”

In 2014, control of the House of Representatives will be up for grabs.

What if Rabel does well for a third party candidate? Let’s say he’s pulling ten percent and is taking away significant points from the Democratic candidate. And Rabel gets a call from President Obama asking him to pull out and throw his support to the Democrat.

What will Rabel do?

“My intention is to run and win,” Rabel said. “I don’t intend to drop out under any circumstance.”

Rabel will be visiting the Eastern Panhandle this week.

“I’m appealing to folks who are disgusted with the Democrats and the Republicans,” Rabel told Shepherd University’s WSHC last month. “If we continue to vote time after time after time for these politicians who do not serve us well — that’s a classic definition of insanity — doing the same thing over and over and over again and expecting a different outcome.”