As part of new global Shimmy Mob initiative called Emotional Abuse Signs Awareness (EASA), the public is invited to join a thought provoking gathering to learn about the signs of emotional abuse in relationships. 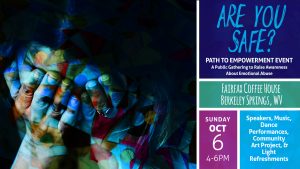 The event will take place at the Fairfax Coffee House in Berkeley Springs, West Virginia Sunday October 6 from 4 pm to 6 pm.

“The event is titled ‘path to empowerment’ to raise awareness about the problem and illustrate that there is a means by which those in abusive relationships can move toward safety and reclaiming power over their own lives,” said Angela Petry, event organizer. “Our hope is to foster healthier families and domestic situations, and provide resources and safety to those who may be in crisis.”

This event is being organized by Bellysima Bellydance and the Berkeley Springs Shimmy Mob Team, Stepping Stones to a Brighter Future, Eastern Panhandle Empowerment Center and is being hosted by Fairfax Coffee House in Berkeley Springs, West Virginia.

Shimmy Mob is a world wide dance event whose primary mission has been to raise funds and awareness for victims of domestic abuse. A new initiative by the Shimmy Mob International asks that teams around the world begin creating awareness around the issue of Emotional Abuse.