Morgan County Sheriff K.C. Bohrer said this week that he has “zero tolerance for littering of any type and will strictly investigate and prosecute” those who violate state law that makes it a crime to litter. 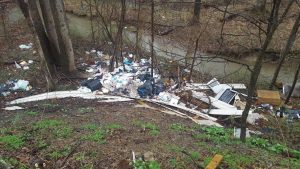 Recently, someone dumped a large amount of what appeared to be construction debris and trash down a bank toward a stream in Morgan County.

A picture was taken of the dump site by community service workers.

“Sadly this is not the only scene in our beautiful county,” Bohrer said. “The Morgan County Sheriff’s Department will be cracking down on those who choose to desecrate our beautiful landscape.”

“Deputies and Natural Resources Police Officers already investigate and work on complaints received. But new innovative techniques will be used to identify those who sadly commit these crimes in the county.”

West Virginia law prohibits the “unlawful disposal of litter on public and private highways, roads, streets or alley’s, private property, public property or the waters of the state or within 100 feet of those waters.”

Fines can range from $500 to $25,000. Violators face jail time under certain sections of the code.

“Tires are often found in open illegal dump sites and are specifically addressed in the code,” Bohrer said.