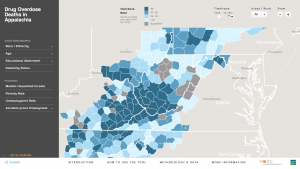 Outside of coal country, Berkeley County and Morgan County had the highest overdose death rates in West Virginia.

A study from the Kaiser Family Foundation shows that in 2016, West Virginia has the nation’s worst opioid overdose rate of 43.4 deaths per year per 100,000.

The Appalachian Overdose Mapping Tool is a data visualization tool illustrating the impact of the opioid epidemic in the Appalachian Region and its relation to socioeconomic factors such as unemployment, poverty, education, and disability.

The tool integrates overdose mortality rates for each Appalachian county with data on unemployment, poverty, and disability, as well as other socioeconomic variables.

Users can compare county-level information with regional and national data and see changes in the data between 2006–2010 and 2011–2015.

The mapping tool can also generate fact sheets to assist in community planning and response efforts.

In August 2017, NORC’s Walsh Center for Rural Health Analysis, which also participated in developing the mapping tool, produced a report for ARC titled Appalachian Diseases of Despair which reveals the extent of mortality rates in Appalachia due to alcoholic liver disease, overdose, and suicide.

The study found that in 2015, overdose-related mortality rates for Appalachia’s 25-44-year-old age group – those in their prime working years – were more than 70 percent higher than for the same age group in the country’s non-Appalachian areas.