A coalition of citizen and environmental groups are calling the administration of Maryland Governor Larry Hogan to take a close look at a proposal by TransCanada unit Columbia Gas Transmission to build a gas pipeline under the Potomac River near Hancock, Maryland. 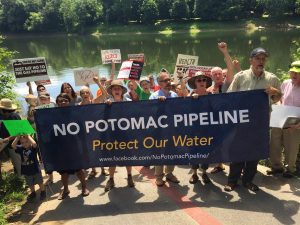 In a letter to Benjamin Grumbles, Secretary of the Maryland Department of the Environment (MDE), the eighteen groups said that they do not believe that TransCanada’s “application contains sufficient information to demonstrate compliance with Maryland’s water quality regulations and other applicable federal and state laws.”

“To conduct a thorough review of the project, it is vital that MDE collect additional information from Columbia. For instance, we recommend that MDE ask for more detailed information on the proposed route, especially under the C&O Canal and Potomac River.”

“At a minimum, MDE should also examine the soil boring and geologic survey already provided by the applicant to determine what additional information it needs to understand the extent to which the applicant will be drilling through karst topography and to evaluate the potential impacts that drilling through this delicate substratum can cause,” the groups wrote.

“MDE should wait to schedule any public hearings or otherwise move forward with the § 401 certification until Columbia has provided all the information necessary for MDE to conduct a thorough review, and the public has had an opportunity to examine that information.”

The groups also want Maryland to take into consideration the fact that the TransCanada pipeline will deliver fracked gas to a proposed Mountaineer Gas pipeline in West Virginia.

“Impacts to streams and the Potomac River from the construction and operation of the combined pipeline proposals could be profound, including potential loss of aquatic habitat, changes in thermal conditions, increased erosion, creation of stream instability and turbidity, impairment of best usages, as well as watershed-wide impacts resulting from placement of the pipeline across virtually untouched bodies of water,” the groups wrote. “MDE should be cognizant of what types of methods Mountaineer Gas will be using for stream and road crossings. The sensitive streams that will be crossed – Back Creek and Opequon Creek – have karst geology which increases the possibility that surface disturbances throughout a wide area around each creek can contaminate private and public wells.”

“Some of these crossings are only within a few miles of the creeks’ confluence with the Potomac River. A catastrophic event, such as a horizontal directional drilling blowout or other construction or operational impact occurring in a stream crossing by Mountaineer Gas has just as much potential to contaminate drinking water supplies downstream as with the crossing of streams within Maryland or the Potomac River by Columbia. The risk of a gas leak once either pipeline is built and operational must also be given due consideration. The release of methane gas into aquifers and the Potomac River can impact wells and drinking water, adversely affecting the health of millions.”

The groups argued that under the Clean Water Act, the states have the right to block a federal permit under section 401.

“A state may deny the section 401 certification, thereby prohibiting the federal permit from being issued at all,” the groups wrote. “For instance, the New York State Department of Environmental Conservation (DEC) recently denied the secction 401 certification for the proposed Northern Access Pipeline because the application failed to demonstrate that it would meet federal and state water quality standards. According to DEC, it could not be assured that the ‘adverse impacts to water quality and associated resources will be avoided or adequately minimized and mitigated so as not to materially interfere with or jeopardize the biological integrity and best usages of affected water bodies and wetlands.’DEC previously denied the proposed Constitution pipeline for failing to provide adequate information to assure compliance with the state’s water quality standards.”