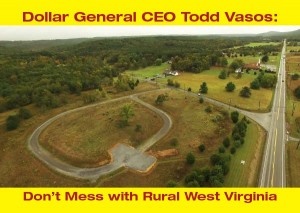 The proposed store has been subject of protests and litigation organized by residents who want to preserve the rural nature of the area.

The proposed Dollar General site is at the corner of US 522 and Oakland Road — across from Cacapon State Park.

Michael Hausfeld, a lawyer representing the citizens in the area, has asked for a meeting with Dollar General CEO Todd Vasos to discuss alternative locations for the Dollar General store. Dollar General has refused to meet.