TransCanada unit Columbia Gas Transmission is moving forward with plans to put a natural gas pipeline under the C&O Canal and the Potomac River about a mile and a half west of Hancock, Maryland. 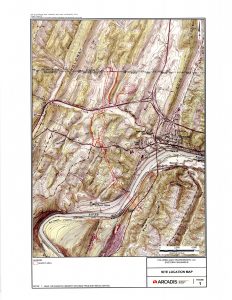 The company is in negotiations with landowners in the area — including the Town of Hancock — to purchase rights of way to build the pipeline.

The company has applied to the National Parks Service for a permit to survey the area.

The company’s application was obtained through a Freedom of Information Act request to the National Parks Service.

According to a map attached to the application, the pipeline route is about a mile and a half west of Hancock.

“Columbia is proposing to conduct civil, cultural and environmental surveys,” the company said in its permit application.

The proposed pipeline would run from the Pennsylvania border south to the C&O Canal and then under the canal and the Potomac River ending close to Lover’s Leap in northern Morgan County West Virginia.

If approved by state and federal authorities, the pipeline would carry fracked natural gas from Pennsylvania to a pipeline proposed by Mountaineer Gas in West Virginia that would take the gas across U.S. Silica’s sand mine east along route 9 to Martinsburg.

A coalition of area farmers, landowners and activists have organized to oppose both the Mountaineer Gas and TransCanada pipeline proposals.

“I was at a presentation last night in Frostburg on the geology of Western Maryland,” said Potomac Riverkeeper Brent Walls. “There were three geologists  there with the Maryland Geological Survey. Afterwards, I informed them of the proposal of Columbia Gas to drill a pipeline under the Potomac near Hancock. Each one of them looked alarmed. Each one of them shook their head in dismay over the choice of that area to drill.”

Walls said that the geologists were shocked because of the karst geology in that area.