Poll Finds Marylanders Oppose Fracking by Two to One

With the clock winding down on Maryland’s two-year moratorium on fracking, a statewide poll of Maryland voters released today shows broad public support for permanently banning the risky drilling practice. 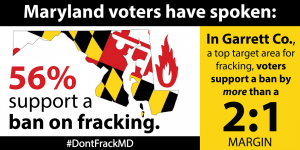 In Garrett County, a prime target area for the oil and gas industry, voters oppose fracking by an even stronger margin.

The poll, conducted by the nonpartisan firm OpinionWorks, found that Maryland voters support a ban on fracking by a 2-to-1 margin, with a 56 percent majority supporting the ban and only 28 percent opposed.

This poll follows on the heels of a recent Washington Post poll finding that a similarly strong majority of Marylanders opposes fracking.

The OpinionWorks poll provides additional insights for state legislators who will weigh legislation to ban fracking in the 2017 Maryland General Assembly.

In Garrett County, the margin of support for a fracking ban is more than 2-to-1, with 57% in support of a ban and only 27% opposed.

By a 3-to-1 margin, voters say they are more likely to vote for a legislator who supports a fracking ban, with 40% more likely and only 13% less likely.

Voter intensity is significantly higher on the pro-ban side: 25% of voters are much more likely to support a pro-ban legislator, compared to only 7% who are much less likely.

“This new poll makes it clear that Maryland voters strongly support a ban on fracking,” said Senator Bobby Zirkin, D-Baltimore County, a longtime supporter of banning the practice, “strengthening the case that it is time for the Maryland General Assembly to act.”

The poll also found that Marylanders have a wide variety of concerns about the significant risks of fracking. Contamination of water was the top concern cited – with one-third of voters worried about the risks – while harm to human and animal health was the second-biggest concern.

Only 6% of voters statewide did not express concern about the risks of fracking.

“Western Marylanders recognize, as the poll shows, that most of our friends and neighbors don’t want fracking,” said Citizen Shale President Paul Roberts. “That is a message difficult to convey in Annapolis when our own representatives fail to speak up for us. So, now is the time for Maryland to move ahead, with legislative leaders committed to securing a healthy and sustainable future for our community and families.”

More than 100 organizations have endorsed the Don’t Frack Maryland campaign and are working to pass a ban on fracking in the upcoming General Assembly session. Unless state legislators take action, Governor Larry Hogan’s administration could allow industrial drilling operations to begin in Maryland soon after October 2017, when the state’s moratorium will expire.

In 2016, the town of Friendsville in Garrett County and Prince George’s County both passed local ordinances banning fracking, joining the town of Mountain Lake Park and Montgomery County. Members of the Anne Arundel County Council also recently wrote a letter urging their state legislative delegation to pass a fracking ban. Last week, nearly 200 citizens rallied in Frostburg and won a commitment from their City Council to advance a municipal ban on fracking.