The Capito Chair in Debate Dodging Unveiled in Berkeley Springs

Call it the Capito Chair in Debate Dodging.

Capito was invited last month to participate in a series of debates with her opponent –Howard Swint of Charleston. 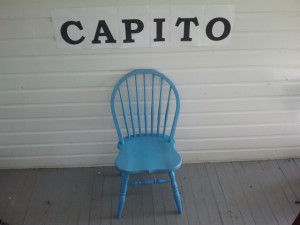 Capito has yet to answer the call.

The first debate will take place Monday June 11 at 6 pm at the Earth Dog Café in Berkeley Springs, West Virginia.

Swint has agreed to attend.

The debates are being sponsored by Morgan County USA, a citizens group based in Berkeley Springs.

The chair is a blue seven swindle Windsor side chair donated by an anonymous citizen who said she “believes in democracy with a small d.”

The chair will be mvoed around the Second Congressional District until Capito agrees to debate her opponent.

“Debates are good for democracy,” said Morgan County USA’s Russell Mokhiber. “It’s a nice chair. Capito should try it out.”