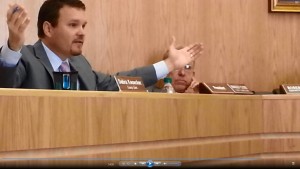 Why should corporations that do business in Berkeley Springs and throughout the county — businesses like McDonald’s, Sheetz, Food Lion and U.S. Silica — not pay an ambulance fee when the average citizen pays $150?

The Commissioners have expressed the view that they will soon get to the fee on businesses, but that it was too “complicated” to work out initially — so they will go ahead first with the fee on individuals and then figure out what to do about businesses.

There are about 400 businesses and about 9,600 residences in Morgan County.

At a public hearing in Paw Paw last night, Commissioner Bob Ford said that “no county in West Virginia” had figured out how to impose an ambulance fee on businesses.

Jefferson County, for one, has figured it out.

Jefferson County charges residents a $40 fee and businesses an $85 fee.

In Jefferson County, the business fee is imposed on commercial units, which are defined as “commercial business, industrial activity, or non residential activity conducted for profit, including by not limited to, any store, filling station, motel, industrial facility, warehouse, flea market, campground, amusement park, institutional living arrangement with centralized services such a nursing homes, assisted living or similar arrangement, bed and breakfast, an entertainment venue, a club, bar or restaurants.”

To address the question of individuals who have a home office, Jefferson County officials say that they don’t impose a business fee unless the public comes to the residential unit to do business.

Commission President Brad Close said that the problem of home based businesses is the one that the Commission is grappling with.

“More work needs to be done to ensure this is handled properly,” Close said.

A third hearing public hearing on the ambulance fee was scheduled for April 7 at 7 pm at the Morgan County Courthouse.

When asked — what about the public hearing at 7 pm — Close said that that meeting will now take place April 7 in the morning before the vote.