David S. Schwartz, 94, of Berkeley Springs, West Virginia passed away on January 2, 2016 after a brief illness. He was surrounded by a circle of loving friends at Valley Health Medical Center in Winchester, Virginia. 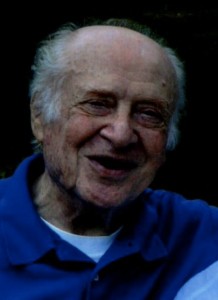 Schwartz was a world renowned economist and a passionate advocate for consumer protections. His work focused on regulatory issues related to the natural gas and electric power industries.

He graduated from University of Maryland with a BS in Economics in 1944 and was awarded his doctorate from the University of Wisconsin in 1950.

Schwartz returned to the United States in 1953 to engage in full-time research at the University of Maryland in College Park before joining the Federal Power Commission — now the Federal Energy Regulatory Commission — where he worked from 1965 to 1974, ultimately serving as Assistant Chief of the Office of Economics.

He frequently testified before Congressional committees, never hesitating to go against political currents in the defense of his strongly held principles.

In 1975, he was awarded an academic appointment from the National Science Foundation.

From 1976 to 1991, as an independent consultant, he worked with, among others, Ohio Senator Howard Metzenbaum.

He was also an adjunct professor at Michigan State University. In the late 1980s, he traveled to South Africa with the commission to research and report on alternatives for providing electricity to the South African people.

He retired to Berkeley Springs and developed a passion for organic gardening and pursued his love of opera.

He and his wife Nina were active and beloved members of the community.

Schwartz was born in New York City in 1921. He was preceded in death by his wifeof 64 years Nina Kragh Schwartz, his brother Morrie Schwartz of Massachusetts, and his parents Charlie and Eva Schwartz of New York City. He is survived by a son, Erik, and two nephews, as well as innumerable friends.

Friends will be received on Thursday, January 7 from 4 to 7 p.m. at Helsley-Johnson Funeral Home & Cremation Center, 95 Union Street, Berkeley Springs, West Virginia. Services and interment will be private.

In lieu of flowers, contributions in his memory may be made to Wind Dance Farm & Earth Education Center, 649 Virginia Line Road, Berkeley Springs, West Virginia 25411.