Capito Syria Iraq and the Road to War

The honks were for a protester standing with a sign that read: “Capito: Vote No Obama War.” 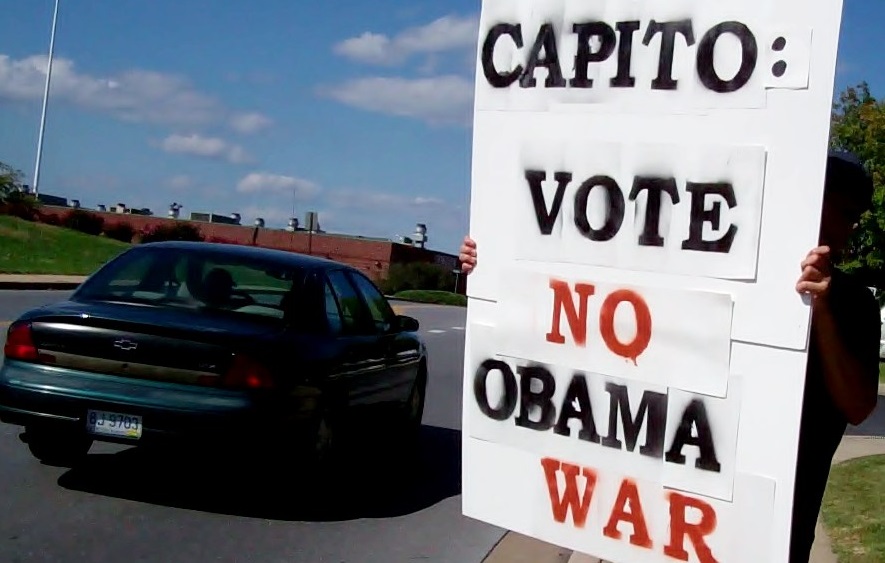 Capito is facing a vote on the Syria war that pits the majority of her constituents — who oppose military intervention in Syria —  against her inclination to side with the two party corporate military establishment.

When Capito greeted us last Friday at the Mineral County Lincoln Day dinner in Keyser, the Congresswoman remembered meeting with us in her Capitol Hill office in Washington, D.C. in November 2007.

“Yes, you have been to my office,” she said.

In 2007, after a year of asking for a meeting to discuss Capito’s vote for the Iraq war, five Morgan County residents travelled to meet with Capito to discuss her vote for the war in Iraq.

“We travelled to meet with Capito to express our views against the immoral war in Iraq,” we wrote on November 8, 2007. “To express our views to our Congresswoman. Who had voted for it. And voted to fund it. She was subdued. She listened. She knows that the war is unpopular. She knows it will be a major issue in next year’s election. She has been hearing from the folks back home – folks throughout her sprawling district. She understands there is mounting frustration. War is not the answer. And yet there we were, mired in it. This year was the deadliest year for young Americans in Iraq – as of Monday, a total of 853 Americans killed so far in Iraq this year. A total of 3,856 Americans killed thus far in Iraq since the war began. Maybe 60,000 young Americans injured. And hundreds of thousands Iraqis killed. Ten billion dollars a month frittered away on the war in Iraq. When we need the ten billion a month at home. And need it badly.”

Has anything changed with Capito since we met six years ago?

We shall soon find out.

On Talkline with Hoppy Kercheval last month, Capito said that if the vote were taken on that day, she would vote against a strike on Syria, but more compelling information might change her mind. (Listen to Hoppy’s interview with Capito here at about 55:00)

But yesterday, Capito said nothing about voting no, telling the Charleston Daily Mail’s Zach Harold “I will consider the information provided by our intelligence officials about Syria’s actions, the path forward proposed by the administration, and the views I hear from people across West Virginia in deciding whether to authorize the use of force.”

Capito’s colleague, Congressman David McKinley (R-West Virginia), on the other hand, told Harold that “America should only take military action when there is a clear national security interest at stake – as well as a clear endgame,” McKinley said. “I’m not convinced that is the case here.”

“I’ll continue to review the facts and listen to the debate on this issue, but right now I am not comfortable putting Americans in harm’s way.”

The vote on the House will be a close one. Capito’s vote will count.

A CNN tally has 67 House members (including McKinley) voting no, 24 voting yes, 267 undecided (including Capito), and 75 unknown.