Fireworks Over Rockwool’s $12,500 Donation to Jefferson County Parks and Rec

Rockwool’s donation of $12,500 to Jefferson County Parks and Recreation has triggered a debate over whether the county should accept money from any corporation willing to donate. 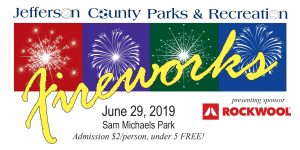 Rockwool’s plan to build a major industrial facility in the middle of a growing residential county has triggered an uprising against the Danish multinational.

And in a public relations move to try and win over the county, Rockwool donated $8,000 to sponsor the Independence Day celebration, $2,500 to sponsor the summer concert series, and another $2,000 for other purposes.

Jefferson County Vision unsuccessfully urged the Parks and Rec board to reject the donation.

“When the working people of Jefferson County pay our taxes — a basic civic duty — we don’t get to put our name on a sponsorship banner,”  said Shaun Amos of Jefferson County Vision. “Our hard-earned tax dollars go towards paying for critical services, such as education for our children.”

“Rockwool on the other hand, refuses to pay those same taxes and is getting funding from the state to help construct 21-story industrial smokestacks, dumping toxic pollutants into our air and water. Instead, Rockwool wants to spend its money on splashy sponsorships to try to buy goodwill in the community — goodwill that it hasn’t earned and doesn’t deserve.”

“We would much prefer Rockwool pay its taxes like every other Jefferson County resident instead of dividing the community with its endless public relations stunt donations.”

Toni Milbourne, the president of Jefferson County Parks and Rec, said that the March 22 2019 vote to accept the Rockwool money was not unanimous. “Two members were opposed to taking the funds, one member abstained, one member recused and five voted for.”

Has Parks and Rec ever taken any money from tobacco or alcohol companies?

“I am not aware of sponsorships,” Milbourne said.

Would Parks and Rec ever take money from tobacco, alcohol or opioid companies?

“I cannot speak to whether the board would or would not accept donations as that would require a potential vote and I am only one vote,” Milbourne said.

“Parks and Rec has never faced this type of issue in the past,” Milbourne said. “The Rockwool sponsorship was brought to the board by the director because of the differing opinions in the county. The board held a meeting with public comment, discussed the issue and voted” to accept the donation.