More than 2,000 out of a total 10,700 Morgan County electricity customers were knocked out of power by Sunday’s wind storm. And more than 260 are still without power, according to Potomac Edison spokesman Aaron Ruegg. 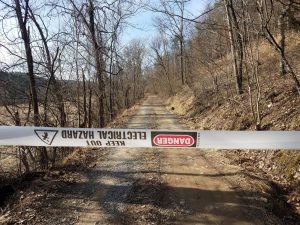 Now a full 40 hours into the outage, customers in Morgan County are not only without power, but still have downed live power lines.

Many Morgan County customers have been told that electricity service won’t be restored until 11 pm on Friday March 1.

About 56,700 Potomac Edison customers in Maryland and West Virginia lost power due to the storm.

Ruegg said that since the storm began, repairs have been made at hundreds of locations, and crews are working around the clock to assess damage and restore service to approximately 202,700 customers who remain without power in Ohio, Pennsylvania, West Virginia, Maryland and New Jersey.

An additional 1,300 contractor line workers as well as hazard responders are being deployed to assist FirstEnergy personnel with restoration efforts. FirstEnergy is the parent company to Potomac Edison.

The company is also requesting additional line workers through its memberships in utility mutual assistance organizations.

“As the wind storm crossed our service territory, we’ve seen thousands of instances of
downed wires, broken poles and crossarms, and damaged transformers caused by trees and other debris contacting our electrical equipment,” Samuel L. Belcher, senior vice
president and president of FirstEnergy Utilities said yesterday. “Though repair work can be slowed by the continued high winds and numerous road closures, we will continue to work around the clock to safely make repairs and deploy resources as needed until power to all customers has been restored.”

FirstEnergy has put up web site that has a county by county tracker of customers affected by the outage.