Frankfort High School social studies teacher and wrestling coach Jason Armentrout will run as an independent against State Senator Charles Trump (R-Morgan) in November. There is no Democrat in the race. 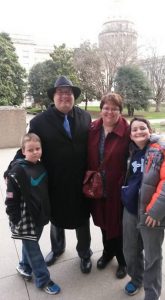 Armentrout has been a teacher at Frankfort High School in Short Gap, West Virginia for fourteen years.

Armentrout says he’s fed up with the dysfunction in Charleston.

And the legislature’s response to the teachers’ strike was the last straw.

“The biggest problem I’ve always had with the Republican Party –they have been so anti-teacher for a long time,” Armentrout said. “I grew up in a conservative evangelical household. I grew up to respect my elders, including my teachers. A lot of these conservatives today don’t respect teachers. Now they have taken it to a new level, to push private school vouchers, to pressure public education. The Republicans are so nasty. And Charlie Trump is enslaved to that platform.”

Even though Armentrout has been a conservative Republican most of his life – he’s now registered as no party – his politics are more in line with State Senator Richard Ojeda (D-Logan) than with Charlie Trump.

“I would hear the needs of teachers,” Armentrout said. “I agree with Senator Ojeda. We need to increase the severance on natural gas. How is so much of the land in West Virginia absentee owned, out of state owned? That’s a big issue. It’s been a big issue for generations. We have watched out of state interests – timber and coal – pillage our state. The companies that made off like bandits are headquartered in New York and New Jersey. We got nothing out of that. The severances were minimal. It’s just like Senator Ojeda said – if two or three companies don’t want to play by our rules, there are others that will.”

“Charlie Trump and I have some pretty obvious differences.”

“I don’t know if I could really run as a Republican or a Democrat.”

Armentrout needs 270 signatures from voters in the 15th Senatorial district to get on the ballot as an independent. Signatures are due August 1.

The district includes all of Morgan and Hampshire Counties and parts of Berkeley and  Mineral counties.