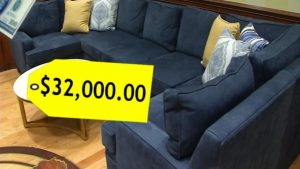 And a $7,500 wooden map of the state of West Virginia cut into Loughry’s office floor – with each county made out of a different piece of wood and with Loughry’s home county – Tucker County – made out of blue granite.

And renovations that ballooned to $3.5 million from an original estimate of $900,000. 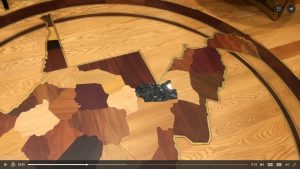 Reporter Kennie Bass now has a picture of the $32,000 couch permanently fixed to his Twitter page.

Bass reported that Steve Canterbury, former administrative director of the West Virginia Supreme Court of Appeals, said Loughry “put a lot of his effort into every detail – we tried to take care of what he requested but ultimately it was his decision.”

Canterbury was in charge of the day-to-day business of the Supreme Court for more than 11 years, and Loughry puts the blame for the spending on him.

“I remember him saying something to the effect that, ‘Well, if anybody gets upset, I’ll just blame it on you, you’re the administrator,’” Canterbury said. “I laughed at that, of course. Good joke. But now the joke’s on me, I guess.”

Loughry happens to be a Republican. And the Republicans control both houses of the legislature. Governor Jim Justice is now a Republican.

And the Republicans want the whole thing to just go away. 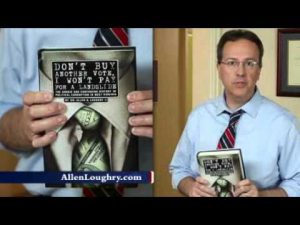 Delegate Michael Pushkin (D-Kanawha) last week took the floor of the House of Delegates and introduced a resolution calling the House Judiciary Committee to launch an impeachment investigation.

Pushkin is joined in his call for an impeachment investigation by Jason Barrett (D-Berkeley).

Barrett took to the airwaves of Talk Radio WRNR in Martinsburg this morning to jump start the impeachment discussion in the Eastern Panhandle.

“We are calling on the House Judiciary Committee to investigate Chief Justice Loughry of the Supreme Court and find out if what exactly went on,” Barrett said. “Is the Chief Justice responsible for some of this abuse of taxpayer dollars? And, should he be impeached? I think the taxpayers of West Virginia are owed that. When you talk about $32,000 couches and $20,000 rugs and all of this kind of stuff – that is not accountable to taxpayers of West Virginia. Rumors that I hear are that it doesn’t stop there. The Chief Justice has said he knew nothing about it. It all happened prior to his arrival or prior to him being Chief Justice. But from what I hear, there are e-mails that say otherwise, and those emails are going to be public knowledge here very soon.”

Barrett said that reporters have filed Freedom of Information Act (FOIA) request to get the emails.

“He has said that he didn’t know of these things and the couch,” Barrett said. “I have never been to his office and no reason to be. But in his office there is an outline of the state of West Virginia. There is a big West Virginia map each county is divided in this map. Fifty-four of the counties are in a wood flooring and his county is in the big piece of granite. To say that some administrator or some employee of the Supreme Court thought that was a good idea doesn’t make much sense to me. It makes sense to me that the Chief Justice wants to make his county to stand out in a piece of granite. Trying to pass that blame on to somebody else, I think it is not appropriate.”

Barrett said he wasn’t sure if there are going to be any Republicans to sign on to the resolution of impeachment.

“If there is not Republican buy in, it won’t go anywhere,” Barrett said. “But we hear that there are some other damaging things coming out against the Chief Justice – some of these crazy purchases and abuse of taxpayer dollars. Not just the couch and the rugs.”

Barrett said he would assume that some members of the Liberty Caucus would sign on to the resolution.

“I’ve been told that S. Marshall Wilson (R-Berkeley) was asked to sign on and he said no, he didn’t think so, it might get him in trouble,” Barrett said.